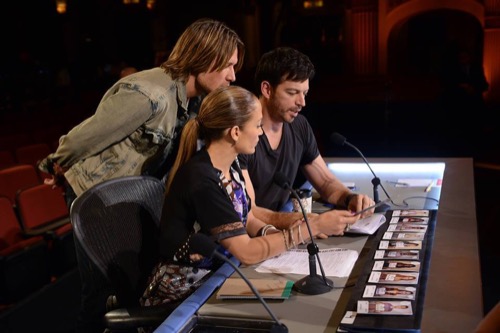 It’s another exciting night of American Idol on FOX with an all new Wednesday February 18, season 14 Episode 13 called “Showcase #1” and we have your weekly recap below. On tonight’s episode, the singers perform in showcases. Also: Some contestants discover their fate.

On tonight’s episode as per the FOX synopsis “tune in as the contestants perform one last time in a special showcase at the House of Blues. Then, some learn their fate”

Tonight’s episode of American Idol kicks off with the 48 remaining contestants on to the next round of Hollywood Week. Tonight there will be one last show that will seal the singers’ fates – but before they sing for America’s votes they have to survive the “final judgment.”

The remaining contestants arrive at the House of Blues in Los Angeles where they will face one final challenge – performing for the American Idol judges Jennifer Lopez, Harry Connick Jr., and Keith Urban. After their performances at House of Blues, the top 24 will be revealed.

Michael Simeon is the first American Idol contestant to take the stage at the House of Blues, he performs a rendition of “You’re So Classic,” and even nails a rapping solo. Michael realizes that he took a huge rick by rapping during his performance – but he wouldn’t to prove to the judges he was worthy of being on American Idol. Now, it is time for Michael’s final judgment. He sits down with Jennifer, Keith, and Harry and they announce that he is in the Top 24.

Adam Ezegelian takes the stage next at the House of Blues and he gets the audience rocking with a performance of Whitesnake’s “Here I Go Again.” Afterwards Adam sits down with the American Idol judges for his final judgment. Adam admits that he never expected to get this far in the competition, but the judges reassure him that he belongs on the show, and he is in the Top 24. Cody Fry sits down with the American Idol judges next for his final judgment, Jennifer explains that Cody “has always done well,” but they don’t think that he has enough to stand out in the competition and unfortunately he is eliminated from American Idol.

17 year old Lovey James performed “Wings” by Little Mix at the House of Blues, and now it is time for her to learn if it was enough to score a position in the Final 24. Jennifer, Harry, and Keith sit down with Lovey and Harry gushes that at House of Blues “she came alive,” and they are putting her through to the Top 24.

After watching a string of fellow contestants being eliminated, Adonna is feeling the pressure, she had some shaky performances during Hollywood Week but she gave it her all at the House of Blues when she performed “A Man’s World.” It’s finally time for Adonna to sit down with Jennifer, Harry, and Keith to learn her fate. Harry explains that it “sucks for people that don’t make it through,” but she is not one of them and she is going through to the Top 24.

16 year old Maddie Walker is the next contestant to head in to judgment day with the American Idol judges. Jennifer Lopez breaks the news to Maddie Walker that she has been eliminated and she is not going through to the next round. After Maddie leaves, the judges feel guilty – Rachel Hallack heads in to the room next, and they can’t decide if they should keep Maddie or Rachel. They bring Maddie back in to the room with Rachel and announces that they are going to have a sing off. Whichever one of them wows the judges will get to stay, and the other will go home.

Maddie volunteers to go first and sings an Capella version of “Red High Heels” first, Rachel follows up with “Son Of A Preacher Man.” Harry, Jennifer, and Keith deliberate over whether or not they should keep Rachel or Maddie. After careful consideration they announce that they have decided to keep Maddie, and they are sending Rachel home. Maddie squeals with excitement, but Rachel is devastated.

The next American Idol contestant to sit down with the American Idol judges is Clark Beckham, he has had some shaky performances during Hollywood Week, but he feels confident about his House of Blues performance and he even got a standing ovation from Keith Urban. Clark sits down with Harry Connick Jr, Keith Urban, and Jennifer Lopez – Harry explains to Clark that he appreciates the fact that he sings and plays the piano. Clark Beckham is going through to the Top 24.

15 year old Daniel Seavey has flirted his way through Hollywood Week with Jennifer Lopez, and the judges have been impressed with him through the beginning. Daniel sits down with the American Idol judges for judgment day and Jennifer Lopez announces to him that he is in the Top 24.

Rayvon Owen heads in to judgment day next. He has been a frontrunner during Hollywood Week, but now it is time for him to learn his fate on American Idol. The judges reveal to Rayvon that he has made it to the Top 24, and Shannon Berthiaume will be joining him as well. Both singers rush out of the room to celebrate with their friends and families.

Now it’s time for Jax to learn her fate, she has wowed the judges so far – but now it is judgment day, and Jax is determined to make her dad proud and move on to the Top 24. Jennifer reveals to Jax that they weren’t impressed with her House of Blues performance – but they are putting her through to the Top 24. Jax sobs and rushes out of the room to break the news to her parents.