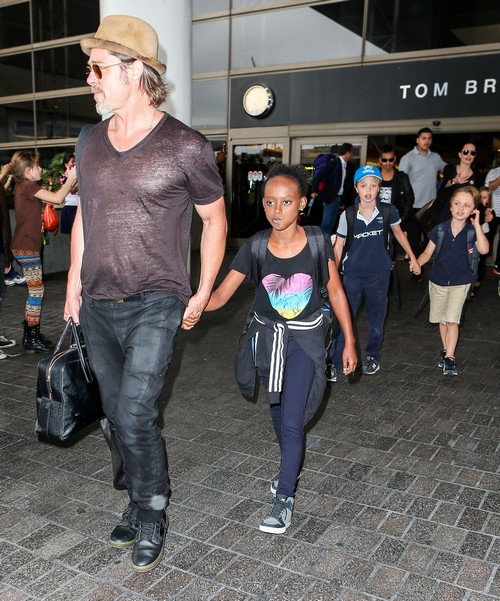 Is Angelina Jolie afraid she and Brad Pitt are headed for a divorce? Brad’s alleged mid-life crisis is stressing their already fragile marriage and they haven’t enjoyed a romantic night out on the town in ages. The actor appears to have alienated all his friends and has stopped talking to his family.

Everyone is worried about Brad as he withdraws further and further from those closest to him. The only people he seems to enjoy spending any time with lately are his children. An insider spoke with The National Enquirer and said that Pitt has become grumpy and withdrawn. All he wants to do is drink alone or work himself into the ground and they are afraid he’s headed for a break-down.

Over the summer reports surfaced that Angie and Brad were having serious marital problems and that a divorce announcement would be made in November 2015 after the couple finished promoting their new movie “By The Sea.” It may be the movie that has caused the trouble – Angelina Jolie admitted in an interview that the project had the potential to cause damage to the Hollywood power couple’s marriage.

Scheduled for release on November 13, “By The Sea” stars Brad Pitt as a United States Army general who is struggling to break-out of his mid-life melancholy. Angelina Jolie directed and stars in the film about a couple who travel to France in a last attempt to save their crumbling marriage.

In an interview Jolie said that even though she and her husband have marital issues those problems are not even close to the marital discord of the characters Pitt and Jolie portray in the film. If they had been she says that they would not have been able to make this movie.

But is Angelina Jolie trying to hide the possibility that Brad may be more like his character than she thinks? He has reportedly become more and more withdrawn and anti-social. Maybe Angelina is in denial that the problems in their marriage really do mirror those of the characters they play in “By The Sea.”

After nearly a decade together the Angelina Jolie and Brad Pitt wed in a private ceremony at Chateau Miraval in France in August 2014. Is their marriage really headed for divorce or can the couple weather the storm of 51-year-old Brad’s mid-life crisis?