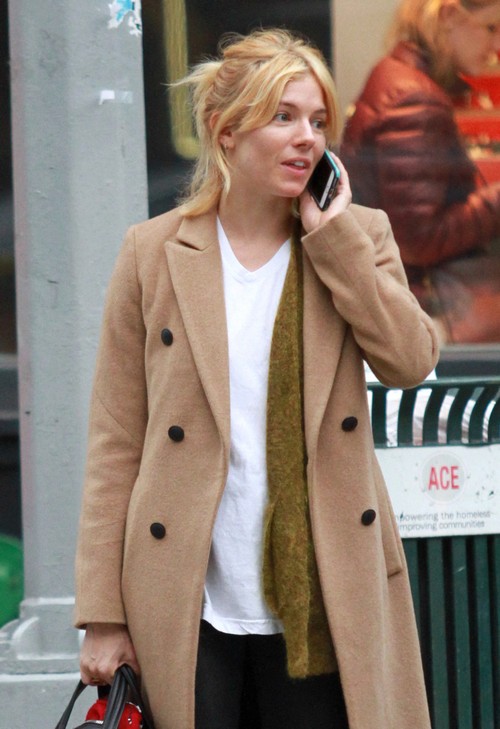 Sienna Miller was seen snuggling up to her “Burnt” co-star Bradley Cooper during the recent film premiere in New York City. Miller is known for getting a little too close to certain male co-stars over the years but many think this time it’s all for show.

There are currently some pretty strong Brad Pitt cheating rumors that Sienna Miller hasn’t been able to shake – in fact Angelina Jolie was allegedly irate and feared Brad would cheat with Sienna. Sienna is starring in “Lost City of Z,” a movie that Pitt is producing. Despite insisting that she’s only ever met Brad Pitt twice and that he hasn’t even been to the Belfast, Ireland set.

Sienna Miller plays the wife of Robert Pattinson’s character in the “The Lost City of Z.” It’s a wonder there aren’t more rumors that the American-born actress is hooking up with her love interest from the upcoming movie.

Of course Pattinson has been locked into a relationship with the musician FKA Twigs. The unlikely couple are reportedly engaged and are said to be getting married soon. That hasn’t stopped a ton of rumors that the couple are having issues. There were reports that Pattinson and FKA Twigs broke up a few weeks ago but it looks like they are still trudging along.

So why aren’t there rumors that Sienna Miller and Robert Pattinson are hooking up? Usually Miller goes for her leading men. Theoretically she could also put the moves on Charlie Hunnam too. He is also starring in “The Lost City of Z” alongside Miller and Pattinson.

Instead, it looks like Sienna Miller is shooting higher with this film. Although she already shot down rumors of a Brad Pitt hookup, she just can’t shake the stories that Miller is breaking up Brad Pitt and Angelina Jolie’s marriage.

Of course it could just be an insecure Angelina Jolie. The “Maleficent” star is reportedly scary thing and has been chain smoking constantly. Jolie also has several new projects keeping her busy with their new production company. It would be pretty easy for Brad Pitt to slip and fall in love with someone other than Angelina.

As for Bradley Cooper, some think that Sienna Miller might have gotten extra cozy next to her “Burnt” star in order to shift her love life rumors in another direction. The “man-eating” Miller has earned herself quite a reputation and now people just expect that she’ll put the moves on someone from her movie sets.

Sienna Miller chats on her cell phone while out and about in New York City, New York on October 24, 2015. Sienna has been busy as of late promoting her latest movie, ‘Burnt.’ FameFlynet