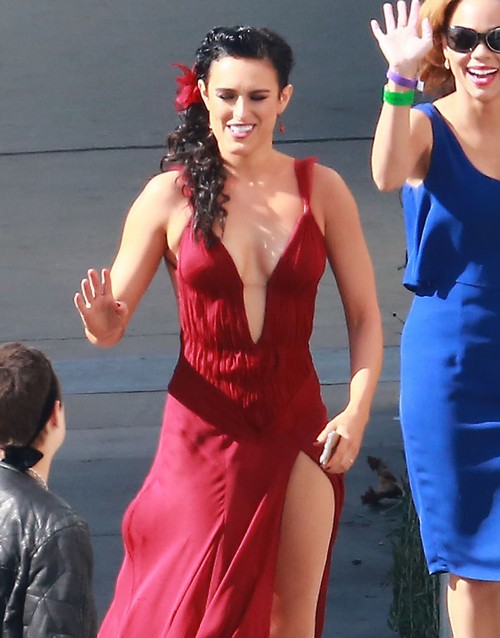 Is Rumer Willis dating former Bachelor Chris Soules?! Chris Soules and Rumer Willis competed on Season 20 of Dancing With The Stars together, Rumer went on to win the Mirror Ball Trophy. During their stints on DWTS, Chris and Rumer were both rumored to be dating their pro dance partners Witney Carson and Val Chmerkosvkiy. But, it looks like we may have read those relationships all were wrong – and Soules and Willis were hooking up with each other!

Rumer Willis and Chris Soules raised a few eyebrows when they attended the Knicks game together on Wednesday October 7 in New York City. Rumer and Chris sat in the VIP section, and it looks like Rumer’s been wearing off on Chris – they were sporting matching black leather coats. The couple laughed throughout the game, and Rumer couldn’t seem to keep her hands off the Iowa farmer, or her attention on the basketball game.

Multiple witnesses at the basketball game are reporting that Rumer Willis and Chris Soules looked very much like a couple. Rumer has always been pretty private when it comes to her dating life. But, it is no secret that Chris Soules is tragically single, and has been since his Bachelor winner Whitney Bischoff dumped him while he was performing on Dancing With The Stars. Maybe Whitney dumping him had nothing to do with his flirting with Witney Carson, maybe he was spending too much time with the competition – Rumer Willis?

Regardless, Rumer and Chris are probably the oddest couple ever. Of all the men knocking on Rumer’s door – we’re baffled why she would choose a reality TV star from Iowa. But, we all know what Chris is doing with Rumer, she could be the missing piece of the puzzle that he has been searching for – their relationship will give him the edge he needs to fully burst in to the Hollywood scene.

Do you guys think that Rumer and Chis make a cute couple? Are you as baffled as we are right now at the thought of them dating? Let us know what you think in the comments below!