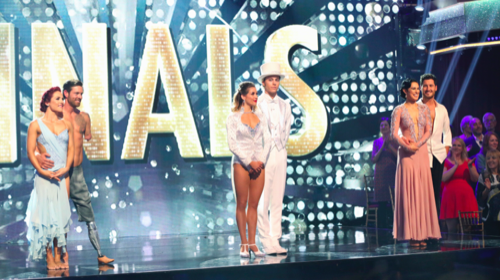 Dancing With The Stars returned last night with the three final couples battling out with two more dances: a dance they previously did and the fan favourite super sized freestyle.  The couples brought their A game because the competition is fierce and anyone can still win. On tonight’s final episode the three remaining contestants will battle it out tonight one last time and by the end of the evening the winner of DWTS Season 20 will be crowned. Did you watch last night’s performance show? We did and we recapped it for you, HERE! Did you miss any one the performances? If you did we have all the videos HERE for your enjoyment!

After last night’s performances at the top of the leader board was both Riker Lynch and Allison Holker along with  Rumer Willis and Valentin Chmerkovskiy with an 80/80 and on the bottom of the leaderboard are Noah Galloway and Sharna Burgess with a 72/80. The competition is really tight this season and it is anyone’s guess who will take the Mirror Ball Trophy.

On tonight’s episode per say the ABC synopsis “the show kicks off with a high-energy opening number featuring a reunion of all 12 of this season’s couples in addition to the judges and hosts. Then, one couple will perform an encore of their Freestyle dance as decided on by the judges. The finale will also feature a performance to “Juicy Wiggle,” by RedFoo and encore performances by Charlotte McKinney and Keo Motsepe to “California Girls,” Suzanne Somers and Tony Dovolani to “Copacabana” featuring six additional dancers, Robert Herjavec and Kym Johnson to “Bills,” Chris Soules and Witney Carson to “Footloose,” Willow Shields and Mark Ballas to “Alice’s Theme,” Nastia Liukin and Derek Hough’s Charleston to “Honey, I’m Good” featuring a performance by Andy Grammar and much more. The night will also include a reprise performance from Patti LaBelle and Artem Chigvintsev to “In Da Club,” and the Grammy award winning artist will also perform her hit song “2 Steps Away.” Additionally, fan favorites from past seasons Amy Purdy, Alfonso Ribeiro and Sadie Robertson return to the ballroom for special performances. Sia will perform her hit song “Elastic Heart” with a special dance performance by Derek and Julianne Hough. The star studded night will continue with a performance by Jason Derulo singing his hit song “Want To Want Me.” In the last element of competition, the couples will perform a new routine as part of a “24 Hour Fusion Challenge.” The remaining couples will fuse two contrasting dance styles that they’ve performed this season and they’ll have less than 24 hours to prepare that dance for additional judges’ points. At the end of the night, the winner of the Gold Mirrorball trophy will be announced!”

Tonight’s episode is going to have all the usual glitz and glam in the ballroom, which you won’t want to miss. So be sure to tune in for our live coverage of ABC’s Dancing With The Stars Season 20 Final Results show and find out who the winner is of DWTS Season 20 – tonight at 9PM EST!