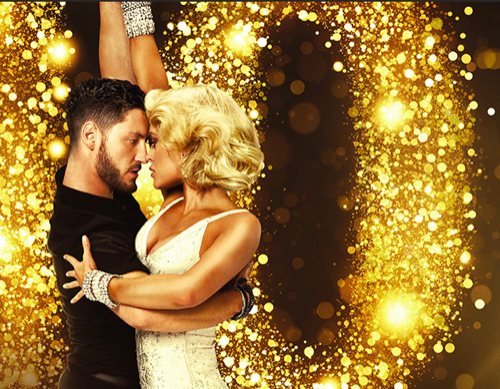 Tonight on ABC Dancing With The Stars 2015 begins with an all new Monday March 16, season 20 premiere and we have your weekly recap below. On tonight’s episode, the 20th-season opener begins with 12 celebrities, including Patti LaBelle, Redfoo, Michael Sam, Suzanne Somers, Robert Herjavec and Rumer Willis. During Week 1, the contestants perform the cha-cha, fox-trot and jive.

On tonight’s episode as per the ABC synopsis, “Dancing with the Stars is back with an all-new celebrity cast who are ready to hit the ballroom for the special 10th Anniversary season. The premiere episode will kick off with a spectacular opening number featuring the entire celebrity cast, choreographed by Emmy nominated, Mandy Moore. Each couple will then perform a Cha Cha, Foxtrot or Jive, vying for America’s vote. One couple will be eliminated tonight.”

Judges Comments: Len: “A great start, well done.” Julianne: “You may be the youngest, but you have some sass, well done for your first dance.” Bruno: “The odds are definitely in your favor, that takes some doing. You broke the ice now, next time attack it more.” Carrie Ann: “You have incredible sophistication, I think you are going to go far.”

Judges Comments: Julianne: “I am completely blown away, I was not expecting that. You looked like you had the time of your life. You had really sharp legs, pointing your toes, amazing.” Bruno: “What a pleasant surprise. I got Flipper, the crazy dolphin, you had so much fun with it. Watch your timing.” Carrie Ann: “You were like a 14 year old dancing, your technique and your hips were great.” Len: “You shocked me, I thought the shark was going to be a fish out of water. You are too light on your feet though and your hips could have worked a bit more. We want to see you grow and go.”

Judges Comments: Bruno: “You are cool, hip and your timely is great. You are brilliant – you dance like my friend Billy Idol.” Carrie Ann: “It was fun, but not brilliant. Nice job.” Len: “Lot’s of energy, next week is the Foxtrot and you need to have refinement and get elegant.” Julianne: “I am so excited about this partnership, this was the perfect combination. Your flips were so tight and so sharp.”

Judges Comments: Carrie Ann: “You had a rough start, but you are so much fun to watch – you are like watching the girl that just goes for it.” Len: “I must say I enjoyed the way  you came out, congratulations, well done.” Julianne: “Jive is a tough dance, you need to work on your legs, the top half is great.” Bruno: “It must take monumental effort with your front frontage, come back next week and have no mistakes.”

Judges Comments: Len: “You won my bell Patti. You had a lovely naturalness about it, 24 carat.” Julianne:“You obviously have a precense, you were like a graceful goddess.” Bruno: “Showbiz royalty, everyone admired it, thank you for being here.” Carrie Ann: “You are incredibly, there a people who come out here and don’t have to do much. Everything I thought was fabulous.”

Judges Comments: Julianne: “I love a country boy, I love Footloose, that was great. Your feet were a little loose, but overall, it was so much fun.” Bruno: “You were totally charming, like a first date. Don’t come forward to much.” Carrie Ann: “You have T-Rex arms, be careful.” Len: “You are like a truck, you need some polish, you have  great potential. Keep it up, well done.”

Judges Comments: Bruno: “That was spunky and funky, good partnership, very very well done. Be careful of your foot placement.” Julianne: “I felt like your feet were sloppy, but overall you have  groove that is within you, well done. Len: “Everything about the dance was terrific, but your footwork was terrible.” Carrie Ann: “You are a beautiful and gorgeous man, don’t stick your booty out and paste a smile on your face.”

Judges Comments: Carrie Ann: “I thought it was fantastic, but there was a lift and you should know better.” Len: “New York New York, it was sweet and delicious.” Julianne: “I thought it was an explosive first dance, you are going to have to work on your flexible upper back.” Bruno: “Be careful, you are so loose, that you have to reign in. It was spectacular.”

Judges Scores: Len: “You dance like your hair, wild and un kept – but it was fun.” Julianne: “I wanted to see more juicy jiggle, I am excited to see what you do week to week.” Bruno: “I love the wackyness, more of that please. The footwork needs to be controlled, come back and sort out your technique.” Carrie Ann: “You know how to work the hook, let’s get the whole dance going on next week.”

Judges Comments: Bruno: “Tony, you have lost it completely wearing that outfit. Be careful of your feet but very well executed.” Carrie Ann: “You are a ray of sunshine, you show us that you can work it.” Len: “You are in lovely condition, this was fun, a little too careful though.” Julianne: “I loved your ankles and your feet, it was a safe, I want to see more raunchy.”

Judges Comments: Carrie Ann: “Where have you been? That was incredible, you are in it to win it. Len: It was intense, this could be your season.” Julianne: “What a vision, I have chills, oh my gosh. The passion you both had, you both are the ones to watch.” Bruno: “Focus, powerful, evolving and the best arms I have seen tonight.”