BY Bianca on March 16, 2015 | Comments: one comment
Related : Dancing With the stars, Reality TV, Spoiler, Television, The Bachelor 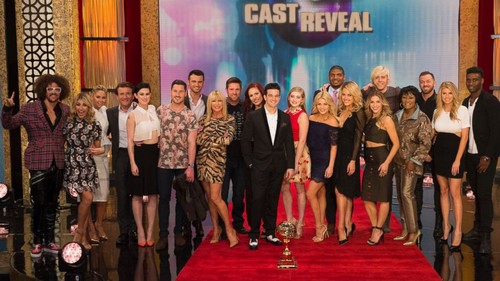 The season 20 of ‘Dancing With the Stars’ 2015 premiers Monday, March 16 at 8 p.m. ET on ABC, and the cast lineup is packed with celebs including a soul singer, Olympic athletes, and an inspiring former soldier. The DWTS cast members have been paired up with their pro partners and we have the details on each contestant.

Check out this list of ‘Dancing With the Stars’ celebrity competitors:

Nastia Liukin is paired with Derek Hough. Liukin is a former Olympic athlete. She won the All-Around gold medal at the 2008 games in Beijing and is currently studying at NYU. Nastia is studying Sports Management at the Tisch Center for Hospitality, Tourism, and Sports Management.

Noah Galloway will dance with his pro partner, Sharna Burgess. He is an amazing man who lost his left arm and left leg during his second tour of Operation Iraqi Freedom. His Humvee hit a tripwire and detonated a roadside bomb. Being a double amputee hasn’t slowed Galloway down. The military veteran travels around the world as a motivational speaker, and he competes in 10K races, Tough Mudders, and Spartan events.

Robert Herjavec will have Kym Johnson as his dancing pro. If you are a fan of ‘Shark Tank,’ you’ll recognize him as the “nice” shark. He began his career as a waiter, but grew his IT companies into a multi-million dollar empire. His website claims he’s currently worth $100 million.

Riker Lynch will be joined by Allison Holker. ‘Glee’ fans, or Gleeks, will know this Warbler. Riker, who happens to be a cousin of Derek Hough and DWTS judge Julianne Hough, also sings and plays the bass for R5. It will be a friendly rivalry on the dance floor. Lynch told E! News he, “doesn’t see them very often, but we’re cool.” Derek even sent a him a text message congratulating him on joining the ‘Dancing With the Stars’ cast.

Patti LaBelle and Artem Chigvintsev have been paired together. The soul singer has been in the music industry over 50 years. She has made history several times during her career including being a part of the first African-American group to land the cover of Rolling Stone magazine and perform at the Metropolitan Opera House.

Rumer Willis has been assigned Val Chmerkovskiy as her pro partner. Rumer is known as the daughter of Demi Moore and Bruce Willis, but she has been working on breaking into the music industry with her band. She is also no stranger to acting; her first film was with her mother in ‘Now and Then.’

Suzanne Somers joins Tony Dovolani in the DWTS competition. Children of the 90’s will know her as Carol Lambert on ‘Step by Step’ and older generations will recognize her as Chrissy on “Three’s Company.” Somers ranks as one of the top seven oldest competitors on ‘Dancing With the Stars.’

Chris Soules is partnered with Witney Carson in the hunt for the disco ball trophy. The fourth-generation farmer comes from a tiny town in Iowa, but had women begging for his attention on ‘The Bachelor.’

Willow Shields counts Mark Ballas as her pro partner. The 14-year-old is best known for her role as Primrose Everdeen in ‘The Hunger Games’ franchise. Willow is no stranger to the dance world and takes hip-hop, ballet, and modern dance classes as a “hobby” according to Just Jared Jr.

Michael Sam has been paired up with Peta Murgatroyd. The football player was brave enough to come out as the first openly gay player to be drafted in any American sport. He has a supportive fan base that includes One Direction boy band member, Harry Styles. He wore a Michael Sam No. 96 jersey during an August concert in St. Louis, to show his support during NFL roster cuts.

Charlotte McKinney has pro partner Keo Motsepe. McKinney is a model made famous by appearing practically nude for Carl’s Jr. Super Bowl commercial. Billed as the next Kate Upton, McKinney dropped out of school early after bullies were constantly mean to her. She left to chase her dream of being a model bullied according to her Esquire interview.

Redfoo joins DWTS pro Emma Slater. The LMFAO member is the first contestant who was once a guest judge for the show. Redfoo joined the panel on Season 18 of ‘Dancing With the Stars.’ Dancing and music aren’t actually his first passion. The ‘Party Anthem’ crooner wanted to be a tennis star, but abandoned the idea of playing the sport professionally after a snowboarding accident hindered his skills.