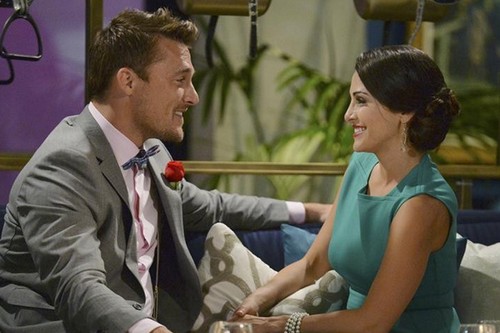 Could Andi Dorfman and Chris Soules be getting back together? If ever there was a perfect match in Bachelor history – it would have to be fame-hungry Andi Dorfman and Chris Soules. Both contestants were adamant they were “searching for love,” but at the end of the day their engagements crashed and burned because they were too busy searching for fame and trying to extend their five minutes of fame.
Bachelor and Bachelorette fans are well aware of Chris and Andi’s history, and how Andi dumped him after she travelled to his Iowa farm and met his family. Since Chris’s stint as The Bachelor he has been busy starring on every reality TV show that would cast him, and Andi is working on a tell-all book about her past relationships.

According to a source close to fame-hungry Andi Dorfman, the former Bachelorette reached out to him because she wanted to include a piece about him in her new book. Obviously Chris was thrilled by the idea because he will take any press and free publicity that he can get. The insider dished, “Andi contacted Chris and told him she wanted to meet up, to discuss the book. But, they have a lot in common and they are both trying to make it in the entertainment world – so they reignited an old spark. They have been talking constantly, and are making plans to secretly meet up.”

Seriously? We’re not sure who is using whom more … Andi and Chris are probably both salivating at the idea of their names scrawled across all of the tabloids. They will probably both call the paparazzi on each other when they are “secretly hanging out.” At this point Chris Soules and Andi Dorfman are absolutely perfect for each other. What do you guys think? Could Andi and Chris wind up dating again? Are they just using each other, or do they still honestly care about each other? Let us know what you think in the comments below!