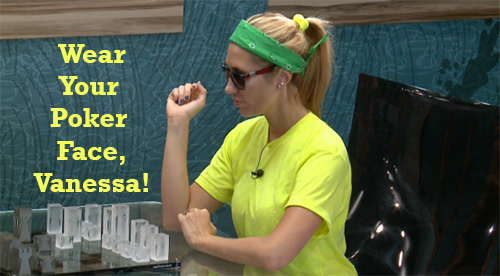 Big Brother 17 spoilers confirm that pro wrestler Austin is the Week 9 Head Of Household, and Vanessa Rousso is one hot paranoid mess. Since Austin was crowned the new Head of Household on Thursday night, BB17 spoilers from the LIVE Feeds tease that Vanessa is freaking out – she is certain that her time has come and Austin and the twins are planning on back-dooring her.

According to Big Brother spoilers from the live feeds, Vanessa is half right. Austin and the twins have every intention of back-dooring her and evicting her, but they might not do it this week. While Vanessa was pacing around the house all night and begging Steve to give her any info he had on the nominations ceremony, AusTwins were holed up in the HOH room discussing their nomination plans for Week 9. There is a decent chance that they decide to keep Vanessa around for another week and go after another obvious target this week. Ironically, at the rate Vanessa is unravelling, they might decide to evict her any way – even though that wasn’t their original plan.

Austin and the twins have been tossing around a few names for the Week 9 nomination ceremony, but there is nothing concrete at this point. John, Steve, and Vanessa are all on Austin’s list of targets – but he has a serious decision to make seeing as how he has formed alliances with each of them at some point. Meanwhile, Vanessa’s extreme paranoia could wind up sealing her fate – and not in a good way. Big Brother Spoilers from the live feeds tease that she already has begun hounding Austin and reminding him that she didn’t backdoor him when she was HoH.

Who do you think Austin will nominate this week on Big Brother season 17? Will Vanessa get put up just because she is annoying and paranoid? Is that a good enough reason to send her packing? Let us know what you think in the comments below!