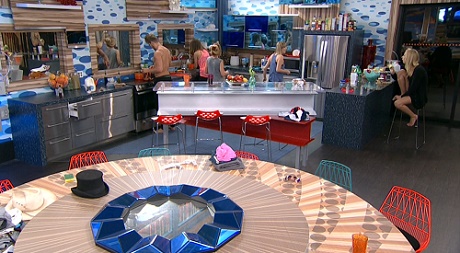 Big Brother 17 spoilers are constantly rolling in thanks to the CBS BB17 Live Feeds, and let’s just say the drama in the house is as colorful as ever. It will be interesting to see what happens over the coming days, especially with regards to the Veto Ceremony, which should be occurring sometime today. If you missed last night’s BB17 broadcast on CBS, click here for CDL’s full recap.

As you probably already know, thanks to our Big Brother spoilers, John was put up as a pawn (once again), threw the BotB competition, and then ended up winning the Power of Veto. It’s obvious he’s going to use it to remove himself from the block. Therefore, Vanessa will be forced to put up a REnom.  And it’s looking like it’s going to be Jeff -especially after he lied to Vanessa. That sort of sealed his fate. James was V’s original target, but she seemed to be having a change of heart after James administered to her a heartfelt and rather sincere apology.
While it’s lookin like Jeff will go up, the game of Big Brother is all about expecting the unexpected, so put on your hard hats, folks, because we are headed into uncertain territory here. Drama zone ahead!
We’ll keep you updated on all the most important spoilers and will definitely be letting you know when Vanessa finalizes her REnom for Week 3.
In the meantime, please enjoy some highlights from the Big Brother 17 Live Feeds and don’t forget to keep checking CDL for all your Big Brother season 17 spoilers, news, gossip, and updates.
Big Brother 17 Live Feed Highlights 7/13/15(this post will be updated over the course of the day, so keep checking back often):
10:20 AM PST — The Live feeds are closed due to the HG’s playing/participating in something “secret.”
10:40ish PST — Feeds returned for a bit and some people in the bedroom were talking about the impending PoV ceremony. They must have been playing a prize competition. In this kitchen, Clay can be heard saying, “Man, I really wanted to win that. I have to win something.”
10:55 PST — Clay asks if the Veto Meeting will be at 12. John responds, “I don’t know.” But he confirms that it will be sometime later today though. Austin, Clay, Shelli, and John are in the kitchen.
11:05 PST — James, Jason, and Meg are chatting about whatever competition they just had. Apparently, Meg won the prize – and it sounds like it’s a trip of some sort.
11:25 PST — In the backyard, John and Clay are talking about Becky. John says that Becky can really keep her mouth shut where it counts, and Clay says that she’s probably the next person that they’re going to bring into their lil’ group. Clay says that he doesn’t think she’d ever intentionally throw any of them under the bus. Clay says it sucks about Jeff, because he’s a good guy, but he just got caught up in his lies too much and never stopped talking. Clay admits to John that he was sort of like Jeff in the beginning of the game — he talked to much. But Shelli helped reign him in, and now he’s grateful for that. Clay says that one of the reason he and Shelli are remaining so close to Audrey, or at least keeping things cordial, is because you never know when she’ll be sticking around another week. And making her your enemy probably isn’t the best idea.
12:15ish PST — People continue to wonder about when the VETO Meeting will be. Vanessa is in her HoH room getting ready, preparing her speech, and afraid to leave her room because she doesn’t want to get cornered by any of the houseguests downstairs. Ha! She’s really getting worried about this ceremony. She says she’s going to suck and she’s going to cry.
12:30 PST — Jason and John chat outside. John says that he will probably be voting for Jeff to stay – just because he really has had his back during this game. Jason says that’s kind of the situation he was in with Day. He told Meg straightup that he would be voting to keep Day.
Veto Meeting Results — As expected, John removes himself from the chopping block and Vanessa makes Jeff the REnom. It’s pretty obvious that he’ll be going home this week – unless he manages to totally flip the house and secure a miracle.