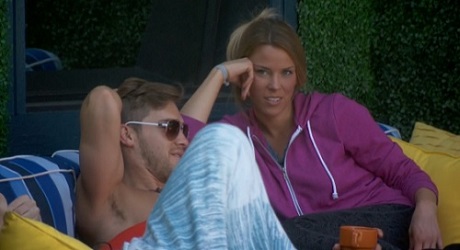 Big Brother 17 spoilers are always on our radar thanks to the CBS BB17 Live Feeds, and the energy in the house continues to intensify, especially as the Week 3 eviction ceremony approaches. It will be interesting to see what happens over the coming days; however, it seems to be a done-deal that Jeff will be the one packing.

BB17 spoilers from the LIVE feeds Monday night: Jeff was seen talking with Clay in the yard. Jeff told Clay that he believes they have made a solid, great alliance. Haha! Can Jeff be so clueless? Apparently so. Because Clay is in hella deep with Vanessa, current HoH responsible for Jeff’s impending demise, and her partners, Liz/Julia and Austin. Jeff asked Clay to do him a solid and let him know if he hears any word regarding people’s voting plans.

Clay told Jeff that he doesn’t question his integrity as a human being, but he did admit that he has lost some of Jeff’s trust in this game, which has caused him (and Shelli) to pull away from him. He tells Jeff that, at the end of the day, he and Shelli – with whom he has the highest level of trust – are going to do what is best for their game. Now, keep in mind, a lot of what Clay was feeding Jeff was spiced up with B.S. – but it was also laced with some truth. He said that, first and foremost, he looks for trust in an alliance and he has expectations regarding these relationships.

Jeff flat out asked Clay where he stands with his vote. Clay didn’t give a straight answer, and he brought up the scenario where Vanessa called Jeff out in his lies. Clay said this raised a red flag for him – and James has never flat out lied to him.

Big Brother 17 Live Feeds Highlights 7/14/15 (this post will be updated over the course of the day, so keep checking back often):

11:10ish PST — Audrey sits on the couch and watches as Shelli and Clay work to put down the awnings in the backyard. Audrey is also wearing Clay’s Texas A&M shirt. Weird. Clay is so annoyed with Audrey and he’s not afraid to verbalize it. LOL. They act sort of like siblings. Clay basically asks Audrey to go back inside so he and Shelli can stay outside and hangout without her there, but Audrey stays there.

11:16 PST — Johnny Mac joins them outside. Shelli starts talking about how she wishes she would’ve lived in a variety of places when she was in her twenties. She says she has an itch to have an adventure.

11:30ish PST — Shelli and Audrey continue chatting it up. Clay, who seems to be incredibly irked/annoyed by Audrey’s presence, stays quiet.

11:45 PST — John, Clay, Shelli, and Audrey are the only ones up. Someone else needs to wake up asap.

8:00ish PST — Nothing too exciting going on. People were just walking around and talking about stuff all day.

8:47 PST — Clay, Shelli, Audrey, and James were in a bedroom together chatting. Audrey and Clay continue to go at it like a couple of siblings on their last nerves with each other, and Shelli continues to have fun with them. It’s funny how Audrey and Clay can joke around about their trust issues and still remain cordial haha.

***I realize this has been a super lame LIVE Feeds Highlight post today, but there’s not much drama circulating around the house given the fact that both James and Jeff are sort of choosing not to campaign for people’s votes. It’s basically a done deal that Jeff’s going home, and I think both Jeff and James are starting to sense that energy. Anyway, if any other earth shattering news crops up tonight, we’ll be sure to make note of it here. If not . . . until next time, lovely readers!***