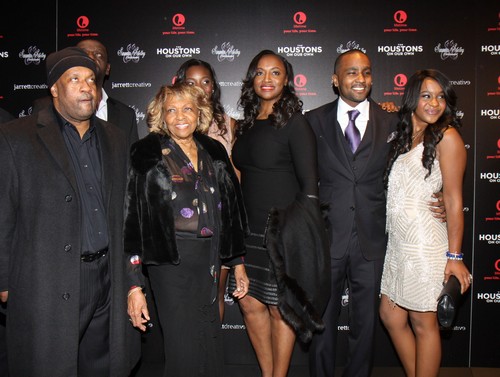 Bobby Brown has been holding vigil at his daughter Bobbi Kristina Brown’s side since January 31st when she was found unresponsive in her bath tub and was rushed to the hospital. Meanwhile Bobby Brown’s greedy family is shooting a reality TV show chronicling the wait for Bobbi Kristina Brown to die or wake up. Bobbi is also at risk from the Houston family who are pressuring Bobby to end life support – of course the Houstons stand to come into Whitney Houston’s $20 Million inheritance so their motives are clearly in question. Let’s face it, neither side of Bobbi Kristina Brown’s family can be trusted to look out for her best interests based on their behavior so far.

The daughter of Bobby Brown and Whitney Houston has remained on life-support and in a medically induced coma since she arrived – and has shown no progress over the last few weeks. Multiple sources close to Bobbi’s family have reported to news outlets that if anything Bobbi Kristina’s health has worsened. Doctors tried to bring Bobbi out of the medically induced coma she has been in and she began having violent seizures and they had no choice but to put her back in a coma.

Bobby Brown remains optimistic that his daughter Bobbi Kristina will awaken any day now – but every day that goes by the odds of that happening become less and less likely. Several different medical professionals have voiced their opinions on Bobbi’s case and they all have one thing in common, her chances of pulling through are dismal to say the least. Cissy Houston is reportedly pressuring Bobby Brown to remove Krissy form the life-support machines and say his goodbyes to her, but he is resisting and refuses to accept the fact that the odds of Bobbi Kristina waking up are becoming slimmer and slimmer every day.

Several members of the Brown Family think that Cissy Houston is pushing for Bobbi Kristina to be removed from life-support so that the Houstons can cash in on her mother Whitney’s $20 Million inheritance. Of course the Brown family want Bobbi to remain on life support so they can continue filming their reality TV show. This reality TV show filming over a young woman’s desperate struggle to survive must be the most disgusting example of predatory entertainment in modern history. We repeat in case you think you read this incorrectly: the mercenary Brown family is shooting a reality show while poor Bobbi remains in a coma on life support!

Is Cissy Houston a greedy cold-hearted Grandmother – or is she just being a realist? It’s impossible to imagine what you would do in that situation, if you had a loved one being kept alive by machines, would you be able to say your goodbyes and pull the plug? Bobbi Kristina has officially been on life-support for a month now – if she were going to wake up or improve wouldn’t she have done so by now? Let us know what you think in the comments below!