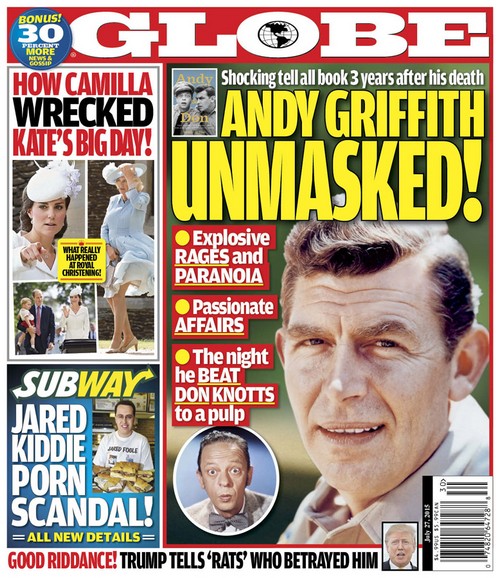 The Royal Family got decked out in their finest and headed to St. Mary Magdalene Church for Kate Middleton and Prince William’s daughter Princess Charlotte’s christening. They even allowed Camilla Parker-Bowles to attend, even though they banned her from being a part of Charlotte’s life amidst her cheating scandal and rumored divorce from Prince Charles. But, the Duchess of Cornwall was not about to be upstaged by an infant – and she stole the show with a Marilyn Monroe moment.

The July 27 cover of GLOBE Magazine teases an inside story on Princess Charlotte’s christening, and Camilla Parker-Bowles flashing the world her undergarments on the big day. The headline teases, “How Camilla Wrecked Kate’s Bid Day,” and promises the inside scoop on “what really happened at Charlotte’s christening.” It sounds like what we suspected might be true all along – and Camilla Parker-Bowles “accidental” flashing, was actually planned and executed perfectly.

In other celebrity gossip news, this week’s cover of GLOBE Magazine teases the inside looks at a shocking tell-all book about the late Andy Griffith. According to GLOBE Andy suffered from “explosive rage and paranoia,” and the magazine promises an inside scoop on “the night he beat Don Knotts to a pulp.” Of course our friends at GLOBE are always up on the latest news, and Subway spokesperson Jared also made the July 27 cover, the headline teases: “Jared Kiddie Porn Scandal: All The Details.” And this week’s edition of GLOBE Magazine will feature another story on Donald Trump – and his enemies and friends – the man sure does know how to make headlines!

So, what did you think of Camilla Parker-Bowles flashing everyone at Princess Charlotte’s christening? Was it an innocent accident, or a carefully orchestrated plan to sabotage Kate Middleton’s big day? Let us know what you think in the comments below, and don’t forget to pic up a copy of this week’s edition of GLOBE Magazine as soon as it hits the newsstands!