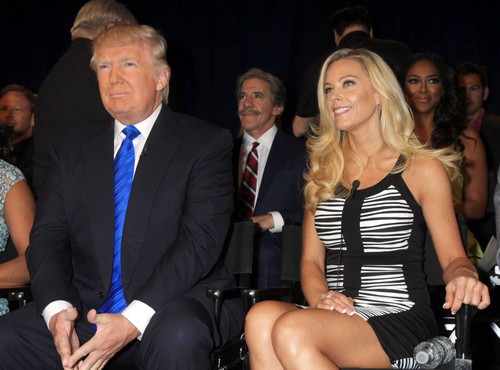 Does Kate Gosselin make it to the final two of Celebrity Apprentice 2015 or are Kate Gosselin and Donald Trump lying to boost ratings of their respective TV shows. A sneak peek spoiler of this season’s Celebrity Apprentice 2015 final four says Donald Trump will include: Brandi Glanville, Vivica A Fox, Leeza Gibbons and Ian Ziering. But, contrary to this insider scoop, both Donald Trump (he of the especially bad hair) and Kate Gosselin (she of the especially bad parenting habits) intimate that the mom of far too many is in the final two. So, what’s the deal and who’s fibbing?

Well, let’s see. Kate Plus 8 just started the new season of her reality show kid-pimping extravaganza and wants big ratings so she can keep the money rolling into to pay for private school/Botox/handouts to her loser ex-hubby Jon Gosselin. And, Trump will do anything for ratings (except get a decent haircut), so they both could be telling tales out of school to try and keep people tuning in. So far, Kate Gosselin has been flying under the radar on Celebrity Apprentice and hasn’t been too impressive.

I wonder if when she gets to be Project Manager if she’s going to try and micro-manage the celebrities like she does her unruly kids. Brandi has been very active, so it makes sense that she’d make it to the finals. Vivica is kind of an aggressive nutter but she seems well liked, so I can see her in the finals. Leeza can raise a ton of cash since she knows sooo many actual celebrities, so she makes sense. And as for Ian Ziering, if he can chainsaw through a sharknado, he should have no problem getting to the finals.

But Kate? She’s just so meh. She made the insane decision to drop a litter of six kids against her husband’s wishes, brow beat him on national TV to the point of utter humiliation and emasculation, dumped him, drove him to the poorhouse and then continued pimping her kids for profit. Maybe it was all a master plan, who knows? It sure has worked out for her, not so much for those kids or the ex-hubby, though.

All I know is that after watching her verbally castrate her husband for years on Jon and Hate Plus 8, I was looking forward to seeing her lynched in the boardroom. But if what she and Captain Comb-Over are saying is true, we may not see her take real beating til the end. I actually hope the final four is exactly how Naughty Rob has leaked it will be. That will be a great finale and I actually hope Ian, the shark-fighting Chippendale ginger, takes it all.

Not because I’m a 90210 fan, he’s just the only one with a working vocabulary that involves more than two syllable words. Frankly, I’ll be happy just to see Geraldo and his mustache go, no matter who takes the win. It will be interesting to see how far Kate actually gets to see how big of a lie she’s been telling about making it til the end. It looks like Kate Plus Eight more reasons to think she’s a lying, manipulative shrew. Kate, maybe not yet, but soon, we’ll rejoice when we hear – “you’re fired.”