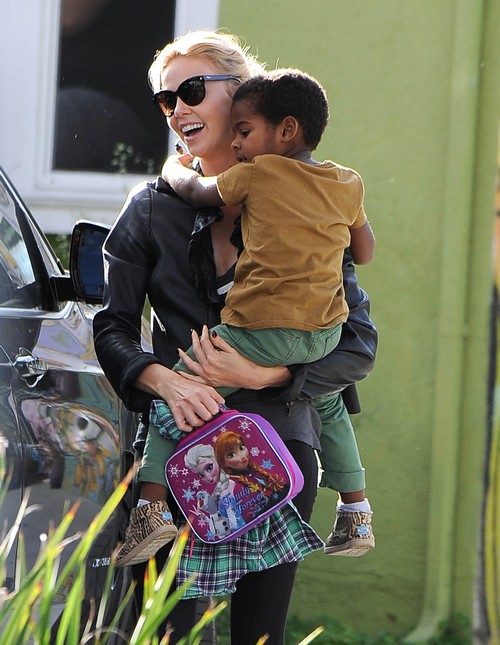 Go Charlize Theron! Whatever else her perceived personal failings, Charlize Theron has just granted a huge boon to female actresses everywhere – or at least, A-list ones – by fighting for equal pay on the Snow White and the Hunstman sequel. By all rights, Charlize Theron is a bigger star than Chris Hemsworth, and yet, she had to fight to get $10 million on her upfront deal and a share of the profits – same as her male co-star who’s profile is significantly less than her. Ah, Hollywood.

According to Page Six, the Sony hack and subsequent leaking of unequal pay on American Hustle has done a lot to make studios more sensitive about the issue. Sony got a lot of slack – from women’s groups and the media – for giving Jennifer Lawrence and Amy Adams less money than Bradley Cooper, Christian Bale, and Jeremy Renner, even though Jennifer Lawrence was probably the biggest name in the cast after Christian Bale.

Page Six’s source explains, “Charlize insisted that she get paid the same money as Chris. She has a great track record, so she got the same deal. One knock-on effect from the Sony hacking scandal is that there will be more sensitivity about equal pay for actresses and hiring practices at movie studios.”

Are we ever going to get to a place where A-list actresses don’t need to actively fight to get this sort of deal? Really, Charlize Theron’s character was the main reason that the first Snow White and the Huntsman movie wasn’t a complete turd, and yet, she was getting less money AND less screentime than Chris Hemsworth? Really, did Chris Hemsworth make an impression on anyone during the first SWATH? Yes, he’s a big star now thanks to The Avengers and Thor, but the fact that most people don’t know him outside of those movies says a lot about his star quotient. Charlize, on the other hand? Yes, people will go see a Charlize Theron movie. No, people are not going to see the ‘guy from Avengers’ movie.

What do you guys think about the standards of unequal pay among actors and actresses in Hollywood? Will it ever change? Let us know your thoughts in the comments below.

Charlize Theron is spotted out and about with her son Jackson on January 7, 2015 in Los Angeles