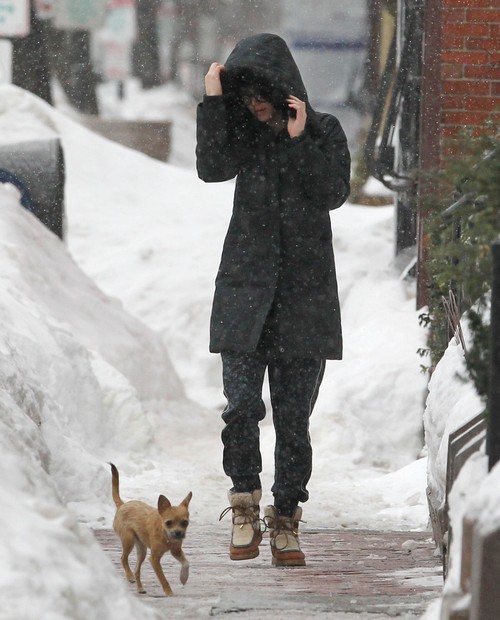 Chris Martin is insisting Gwyneth Paltrow file for divorce so he can prove that he loves Jennifer Lawrence. “Conscious Uncoupling” sure is a fun and catchy phrase, but apparently the fancy terminology for the awkward divorce limbo that Gwyneth Paltrow and Chris Martin are in sounds much more fun on paper than it does when you are actually living it. Gwyneth Paltrow seems to want to remain “consciously uncoupled” with her husband Chris Martin forever – but the rocker has had enough and wants to move on with his new girlfriend Jennifer Lawrence, so he is pushing his estranged wife Gwyn to file the divorce papers already.

The March 9th edition of OK! Magazine reveals, “Chris is uncomfortable with how close they are and is ready to move on with his life – no matter how choked up Gwyn gets. One reason sources say is hi lingering interest in pursuing on-off girlfriend Jennifer Lawrence.” An insider close to the complicated mess snitched to OK!, “Chris hasn’t exactly gone public with the relationship, but it’s not because he doesn’t want to. It’s because Gwyneth talked him out of it. It’s not fair that she can still have such an impact on his love life even though they have supposedly split.”

OK! Magazine’s sources go on to confirm that Chris Martin is not bluffing, and he has been meeting with lawyers all month working on having the divorce papers drawn up. It’s no secret that last December when Jennifer Lawrence and Chris Martin gave their relationship another go-around Jennifer gave him a strict ultimatum – either kiss her good-bye or divorce Gwyn. It sounds like Chris is planning on making good on his promises to the Hunger Games star and cutting his wife of a decade loose – but if we know anything about Gwyneth Paltrow then we know she isn’t going to sit back and let Chris just walk so that he can ride off in to the sunset with his newer younger girlfriend.

Do you think that Gwyn will put up a fight? Doesn’t anyone else find it strange that Gwyn and Chris have been “consciously uncoupled” for so long and neither of them have actually filed for a divorce yet? Will Chris and Jennifer Lawrence’s relationship last – or is divorcing Gwyn just a temporary band-aid? Let us know what you think in the comments below!

Jennifer Lawrence takes her puppy Pippi for a walk in the snow in Boston Common on February 26, 2015 in Boston, Massachusetts. Jennifer risked frostbite to her digitus medius as she extended her middle finger to photographers! FameFlynet