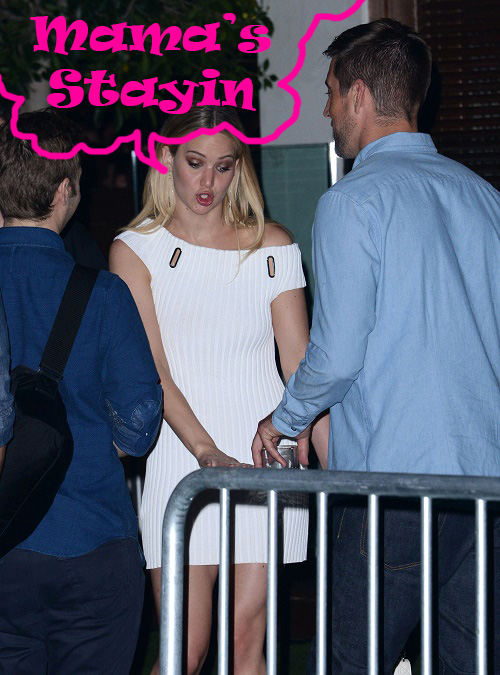 Are Jennifer Lawrence and Chris Martin on the verge of a breakup? It looks like there is trouble in paradise for the Hunger Games actress and Gwyneth Paltrow’s ex-husband. After Chris finalized his divorce, he thought that his relationship with J-Law would pick up pace, and they were rumored to be getting engaged and moving in together – but Jen’s mom, Karen, seems to be putting a damper on Martin’s plans.

Jennifer Lawrence recently purchased a $15 Million condo in New York City’s Tribeca area, and we all thought that it would be her and Chris Martin’s new love nest. Even Chris himself was thrilled to have a new pad on the East Coast for him and J-Law to hide away in. But Jennifer Lawrence quickly burst his bubble when she revealed that she was moving her mom Karen into the new condo!

An insider dished in this week’s edition of In Touch Magazine, “Jen quickly let him know that one room is reserved for Karen. And that has stirred up lots of old drama. Chris doesn’t love Karen because she wanted Jen to get back together with her ex Nicholas Hoult. And Karen is wary of how close Chris is to his ex Gwyneth Paltrow. She would lie to see Jen with a younger guys who doesn’t come with the baggage of two kids.”

It looks like all the odds are stacked up against Chris Martin and Jennifer Lawrence. It’s never a good sign when your own mother is rooting for you to break up. It sounds like Jen’s mom is doing everything in her power to make sure that J-Law and Chris’s relationship doesn’t progress – even if that means moving into their love nest and making thing awkward.

Do you think this could be the end of J-Law and Chris Martin? Is her mom Karen trying to break them up? Let us know what you think in the comments below!