Jennifer Lawrence and Chris Martin Wedding and a Baby: Couple Getting Married, Trying to Get Pregnant? (PHOTO) 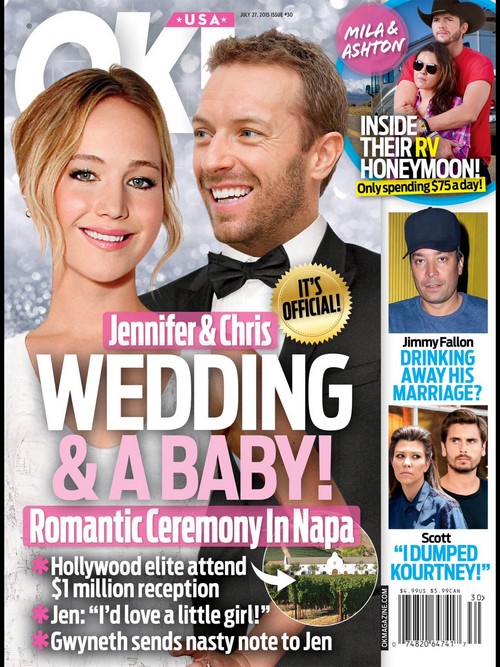 Chris Martin and Jennifer Lawrence were reportedly breaking up last month after he was spotted with Kylie Minogue in London. But, according to the July 27 cover of OK! Magazine the reports of the couple’s break-up couldn’t be any farther from the truth – the Hunger Games actress and Cold Play musician are actually getting married! And, not only are they planning a wedding, but they are also planning to get pregnant with their first baby together!

This week’s cover of OK! Magazine features a photo of the happy couple, J-Law and Chris Martin. The headline screams, “Jennifer & Chris: Wedding And A Baby!” According to OK! Magazine’s inside sources, the couple have been engaged since May 2015 and they are fast-tracking their wedding plans because Jen desperately wants to start getting pregnant and expanding their family. The insider dished, “Jen has even been telling friends that she would like a little girl. Chris is really excited about the idea of becoming a dad again. He loves kids and he thinks that Moses and Apple are at really good ages to accept a new sibling.”

According to OK! Magazine, Jennifer Lawrence and Chris Martin’s wedding is going to be the event of the year – and considering their impressive guest list, it might even put the Oscars to shame. The magazine is reporting that Angelina Jolie-Pitt, Brad Pitt, Kristen Stewart, Bono, Kate Hudson, Bradley Cooper, Clint Eastwood, Emma Stone, and Tom Cruise will all be in attendance. OK!’s source dished on the wedding plans, “They’re looking at venues in Napa, like the Silverado Resort and the Calistago Ranch. Jen thinks it is a perfect locale because it is far enough from LA to feel like a destination wedding but close enough for people to get to it. They’re budgeting close to $1 Million for the reception.”

It sounds like Chris Martin and Jennifer Lawrence are well no their way to being Hollywood’s next “it” couple. Do you think that they will make it down the aisle? Or is there still a chance they could break up? How does Gwyneth Paltrow feel about Chris having babies with his new soon-to-be wife? Let us know what you think in the comments below!