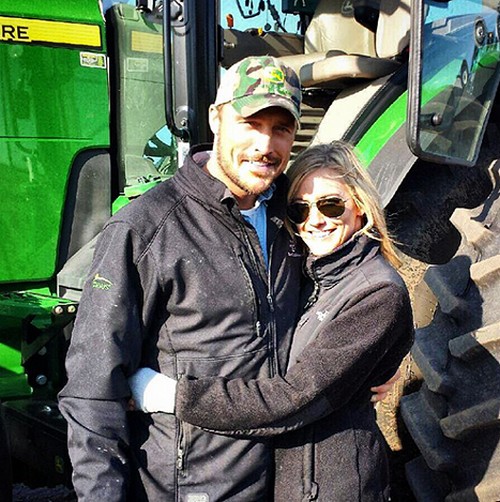 Chris Soules and Whitney Bischoff are broken up, and they are never getting married – but the Bachelor couple is holding up their end of the bargain for ABC and the Bachelor producers and keeping their showmance alive until the premiere of The Bachelorette on May 18. It’s crunch time for Whitney and Chris, this is the absolute worst time for the media to be exposing their break-up. The producers want Chris and Whitney to be the picture perfect couple so that viewers still believe in the dating show and the process when The Bachelorette starts this month.

Chris Soules and Whitney Bischoff bombarded social media on May 13 with photos of Whitney visiting her faux fiancée on his family farm in Iowa. Obviously, pictures of the couple canoodling in Arlington created a huge buzz online and optimistic Bachelor fans were hoping this meant the couple was still getting married after all. Doesn’t it seem a bit ironic that Chris and Whitney haven’t seen each other in weeks, they skipped their 6 month anniversary, and Whitney packed her bags and moved back to Chicago – but the same week as The Bachelorette premiere they suddenly take to social media and profess their “coupleness” for the world to see?

If you are waiting for Chris and Whitney’s cute little televised farm wedding – don’t hold your breath. Sources say that Chris and Whitney will be releasing a joint statement confirming their break-up and citing the difficulties of a long-distance relationship as soon as The Bachelorette premiere is over this month. The 2015 Bachelor and his winner are basically following in Josh Murray and Andi Dorfman’s footsteps: the couple insisted they were madly in love up until they walked the red carpet at The Bachelor premiere, and then less than 48 hours later they confirmed they had broken up in a press release.

Do you think that Chris and Whitney could still be together? Or do you believe that they broke up weeks ago and they are just keeping the showmance alive to please the Bachelor producers? How long after The Bachelorette premiere do you think they will issue a statement confirming their break-up? Let us know what you think in the comments below!