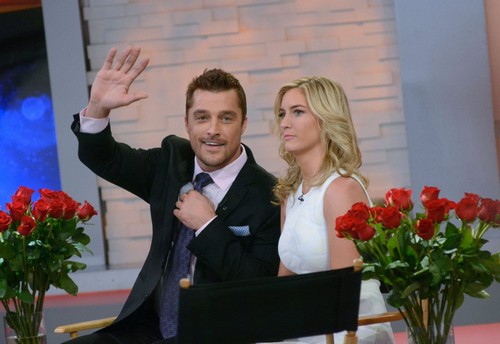 The two night Bachelorette premiere extravaganza is nearly over – and that means that former Bachelor Chris Soules and his fake fianceé Whitney Bischoff can finally stop pretending that they are still a couple and getting married. Since The Bachelor finale, Chris and Whitney’s relationship has basically been doomed from the start. It was obvious they had broken up and were no longer together in April when Whitney moved home to Chicago and began working at her old job – and skipped her fake fiance’s last two performances on Dancing With The Stars.

A few days before The Bachelorette premiere on ABC, Chris and Whitney reunited in Iowa for a very brief visit and posted some photos on social media with each other. Naturally, some optimistic fans assumed that the pictures meant Chris and Whitney were still together and she had finally joined him on his family farm. What Chris and Whitney neglected to mention when they were captioning their photos was that their quality time together was less than 24 hours long, and the next day Chris was back in Los Angeles and she was on her way back to her home in Chicago.

Now that Kaitlyn Bristowe is officially the next Bachelorette, Chris and Whitney can finally breathe a sigh of relief and go their separate ways. What the Bachelor and Bachelorette producers neglect to share with viewers at home is that when you sign on to be The Bachelor, you are basically signing a contract and agreeing to their stipulations for the next six months. Sure, Whitney and Chris could have broken up months ago, but then they could have kissed all of their invites to red carpet events and the perks of being the reigning Bachelor couple goodbye. Remember when Juan Pablo didn’t uphold his end of the bargain and jump at the producers’ beck and call? He was basically shamed by Bachelor Nation and made a mockery of (not that he didn’t entirely deserve it).

The bottom line is – Chris Soules and Whitney Bischoff are probably writing out their joint statement as we speak, confirming what we have known all along, they are officially broken up. Do you think that Chris and Whitney will stay together now that the Bachelor producers have a new crop of people to pimp out on The Bachelorette and they don’t need them anymore? Let us know what you think in the comments below and don’t forget to check CDL for all of your Bachelorette spoilers and news.