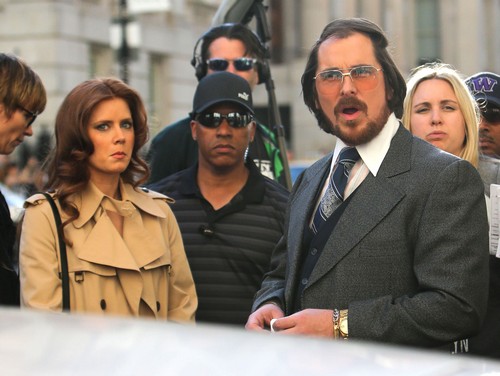 Christian Bale’s reputation might have taken a hit when his on-set rant to a crew member leaked all over the Internet, but this might help in repairing it. According to some more leaked Sony emails [thanks Wikileaks!], Christian Bale might have actually stepped in and defended co-star Amy Adams from director David O. Russell’s crazy rants during filming of American Hustle.

An email from journalist Jonathan Alter to his brother-in-law Michael Lynton, who is the CEO and chair of Sony Entertainment, revealed the truth about the extent of David O. Russell’s lunacy. The email read, “Are you guys doing anything else with him? I know he’s brilliant but we have someone on our show who worked closely with him on ‘American Hustle’ and not only are the stories about him reforming himself total bulls-t but the new stories of his abuse and lunatic behavior are extreme even by Hollywood standards…. He grabbed one guy by the collar, cursed out people repeatedly in front of others and so abused Amy Adams that Christian Bale got in his face and told him to stop acting like an a—hole.”

While Michael Lynton didn’t necessarily confirm anything in his response email, he did reply, “Next film for fox. Trust me I know all about the other.” And really, what other confirmation do we need? It’s very, very clear that David O. Russell is still off his rocker, even though his behavior somehow seems to get strong performances out of his lead actors. However, is it more beneficial or damaging to have that kind of toxic atmosphere on set all the time, even if the actors perform better? And yet, people keep working with him over and over again, so is he as horrible as these reports make him out to be? Or are the results worth it for actors like Amy Adams and Christian Bale?