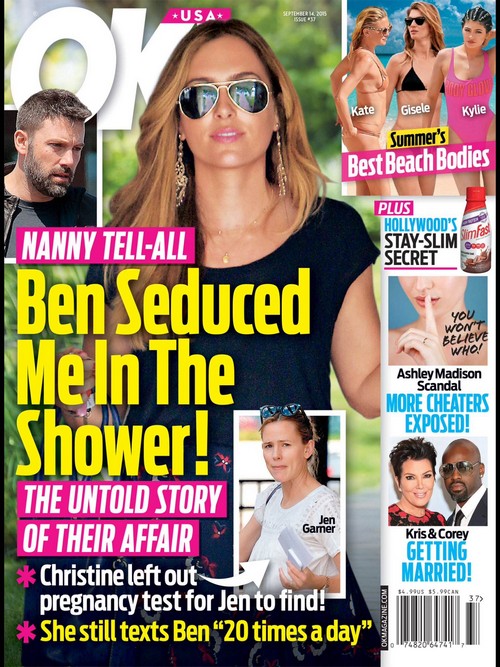 Ben Affleck’s affair with his nanny Christina Ouzounian is not going away any time soon – especially if Christine has anything to do with it. Jennifer Garner and Ben Affleck’s worst nightmare is finally coming true, according to a new report Christine is shopping around an explosive tell-all, and is planning on sharing all the hot and steamy details surround her affair with Ben and his divorce from Garner. Since Ben’s affair with Christine went public, he has been trying to keep her quiet and paying her rent and car payments. But, Ouzounian is finally starting to realize that Ben has no intention of being in a relationship with her – so she is ready to tell all just out of spite.

This week’s edition of OK! Magazine reveals that Christine Ouzounian is not the victim in this situation, she is actually a master manipulator. According to the magazine’s sources, Christine went out of her way to make sure Jen found out Ben was cheating on her because she wanted the couple to get a divorce and was delusional enough to think that Ben was going to be in a relationship with her.

An insider dished to OK! Magazine, “Christine did what she could to speed things along, flirting openly with Ben and even leaving evidence of the relationship where Jen would be sure to find it. Jen suspected something was going on almost from the very beginning. She would come in to a room and find Ben and Christine leaning in to each other and whispering. But, she tried to convince herself it was all in her head.”

The source goes on to add that the final straw was during the family trip to the Bahamas, Christine left a pregnancy test out on the bathroom counter where she was sure that Jen would find it (the test was negative though). And, sure enough Jen found the test and all hell broke loose – she promptly kicked Ben and Christine out, and they jetted off to Las Vegas with Ben’s pal Tom Brady.

Christine Ouzounian is finally starting to see the writing on the wall, and the former nanny is realizing that Ben Affleck has no desire to be with her – he is just buttering her up to keep her quiet and try to make this whole scandal go away. So, she is ready to spill all the details of their affair to the highest bidder, even intimate details like their sexy showers together – and Ben Affleck and Jennifer Garner are freaking out.

Newly single actress and busy mom Jennifer Garner takes her daughter Violet out for ice cream in Pacific Palisades, California on September 2, 2015. Jennifer who recently called it quits with Ben Affleck has been spending as much time as she can with her kids to make the transition easy for them.

Estranged couple Ben Affleck and Jennifer Garner go to a doctors appointment together in Santa Monica, California on September 3, 2015. The pair were all smiles despite the fact that they are going through a divorce. FameFlynet