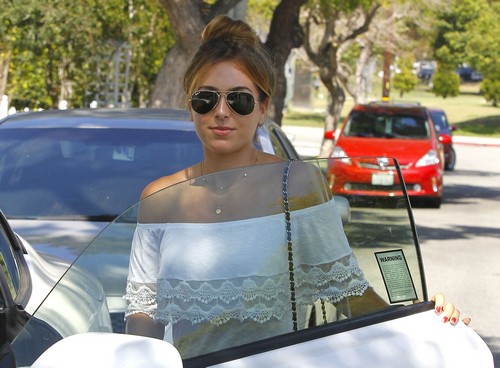 Jennifer Garner is just one of those women who looks nice – she’s got those adorable dimples, seems like a great mom and looks like she’s a real person – but all that may be changing as Jennifer has had it with Ben Affleck. Forget the good girl act, Jennifer has declared war on Ben and has told him flat out “I hate you.” What could cause this sort of vitriol from one of American’s sweetheart actresses? Lots…

According to the National Enquirer, Jennifer Garner feels like Ben Affleck threw their marriage “down the drain.” One of their sources says Jennifer is broken up over how Ben ripped their family apart and is humiliated by recent circumstances like him running around behind her back with their former nanny Christine Ouzounian. Jennifer had planned to keep things amicable, but can’t hold her tongue any more.

According to the Enquirer sources, Jennifer told Ben she was sick of all this and hates him. That could explain their long faces last weekend at Disney and Universal Studios on a family outing for Ben Affleck’s 43rd birthday. Despite their troubles, Jennifer Garner thought she and Ben Affleck were not split for good and thought they were heading for a reconciliation.

That’s when news of Nannygate blew up and Christine Ouzounian stepped in to claim her 15 minutes of fame by being seen out giggling with Ben Affleck at his new apartment. Christine Ouzounian has also been very active on social media posting photos of a new convertible that either Ben Affleck bought for her or selling her story about Ben to the tabloids bought her.

Christine’s social media photos of herself on a private jet with Ben Affleck and Tom Brady – wearing Tom Brady’s Super Bowl rings – was just too much for Jennifer. The pics showed Jen the truth and since then Ben’s denials of cheating have fallen on deaf airs. And, what’s worse, now stories are coming out that Ben has been pursuing other women during their marriage, even when times were good.

According to on-set sources, Ben hit on Blake Lively on the set of their film The Town while he and Jen were married – fortunately, Lively shut him down and has moved on to the much hunkier Ryan Reynolds. There are also persistent rumors that Ben was hooking up with Emily Ratajkowski on the set of Gone Girl. And really, who knows what else has gone on while Ben was on set and Jennifer was home with their three kids?

Sources close to the couple say that Ben confessed to cheating and Jennifer tried to work through it but the infidelity was just too much on top of the drinking and gambling she already disliked. It sounds like Jennifer Garner has good cause to hate Ben Affleck. She’s forgiven him a multitude of sins for the sake of their kids and yet he seems to be just pushing them aside so he can keep indulging in his vices.

Looks like talk of an “amicable split” is long gone and the Ben Affleck-Jennifer Garner divorce will be your typical nasty Hollywood break up brawl that takes place behind closed doors with high priced lawyers so that no one sees just how bitter of a battle it is. I don’t know about you, but I’m firmly Team Jennifer!

Former nanny Christine Ouzounian has a busy day in Santa Monica, California on August 23, 2015. Christine first stopped at Co-Op Natural Foods before getting gas and then finishing off her day at a nail salon. Despite being fired from her job by Jennifer Garner, Christine has been trying to find an agent so she can get on a reality show like ‘The Bachelorette’ or ‘Dancing With The Stars’. FameFlynet

51831086 Former nanny Christine Ouzounian has a busy day in Santa Monica, California on August 23, 2015. Christine first stopped at Co-Op Natural Foods before getting gas and then finishing off her day at a nail salon. Despite being fired from her job by Jennifer Garner, Christine has been trying to find an agent so she can get on a reality show like ‘The Bachelorette’ or ‘Dancing With The Stars’. FameFlynet, Inc – Beverly Hills, CA, USA – +1 (818) 307-4813