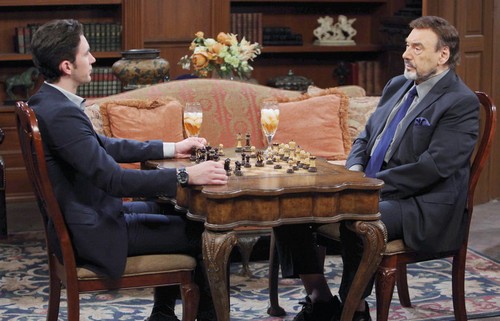 “Days of Our Lives” spoilers reveal that Chad (Billy Flynn) is about to find himself in more trouble than he’s ever been in. When Serena (Melissa Archer) is murdered, Chad will be considered a prime suspect. The circumstances surrounding Serena’s death will be highly suspicious and all the clues will point directly at Chad. Once Rafe (Galen Gering) is formally reinstated as a cop, he’ll discover even more evidence that makes Chad look like the guilty party. “Days” viewers know the Salem Police Department isn’t exactly on top of crime. Ruthless villains like Clyde (James Read) are attacking people all over town, but they never seem to get caught. Meanwhile, Chad gets blamed because he was in the wrong place at the wrong time.

Fortunately, there could be a way to keep Chad from going to prison, but beating the potential assistance will come at a steep price. DOOL spoilers say Stefano (Joseph Mascolo) will offer to step in and take care of Chad’s dire situation. This isn’t the first time Stefano has agreed to clean up a DiMera’s mess and it won’t be the last. However, Stefano always expects to be repaid for his assistance in the form of loyalty.

“Days of Our Lives” spoilers tease that Stefano will only help Chad if he’ll promise to resume his quest for Abigail (Kate Mansi). Stefano wants the land in Ireland for the DiMera dynasty and Chad’s relationship with Abigail is how he plans on getting it. Even though Abigail now knows how valuable the land is, Stefano probably thinks it won’t matter as long as Chad and Abigail are together. As a bonus, Chad would have another shot at true love. In Stefano’s mind, everybody wins.

Of course, it’s doubtful that Chad will see things from Stefano’s point of view. Abigail will inevitably face danger in she gets tangled up with the DiMeras and Chad doesn’t want her to get hurt. Nevertheless, Chad may not have a choice. If Chad wants to hold onto his freedom, he’ll likely need his father’s aid. Still, DiMeras can be awfully stubborn. Will Chad accept Stefano’s help or take a huge risk by handling this on his own? DOOL rumors hint that Chad will eventually clear his name one way or another. Stick with “Days of Our Lives” for updates on Chad’s road to redemption.

So “Days” fans, what do you think about the news that Stefano will want to help Chad in return for his loyalty? Will Chad agree to continue his fight for Abigail or will he opt to face a potential court battle alone? Let us know what you think in the comments below and don’t forget to check CDL often for the latest “Days of Our Lives” spoilers, rumors, updates and news.