Days of Our Lives Spoilers: Jennifer Gets Closer to the Truth, JJ Scrambles to Cover His Tracks, Is Paige Leaving Salem? 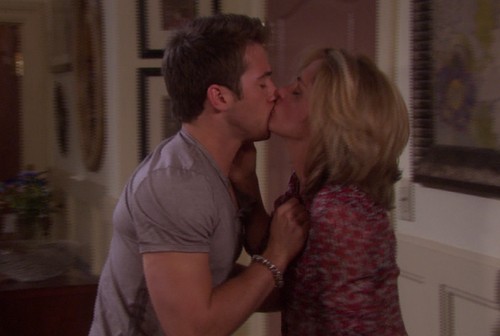 “Days of Our Lives” spoilers tease that JJ (Casey Moss) may have some explaining to do in the near future. So far, he’s been able to cover up his hot encounters with Eve (Kassie DePaiva), but that could change as Jennifer (Melissa Reeves) gets closer to the truth. Days spoilers indicate that Jen will catch JJ and Eve together and become curious about their intimate conversation. Could DOOL viewers even witness another passionate moment between the unlikely lovers? You’ll have to stay tuned to the NBC soap to find out.

“Days of Our Lives” spoilers also hint that JJ will panic as he tries to keep his mom and Paige (True O’Brien) from learning about his scandalous behavior. However, his nervousness could backfire and create even more suspicion. Jennifer certainly isn’t one to let things go, and Paige seems more determined than ever to get to the bottom of JJ’s cheating. With rumors swirling that O’Brien might be on her way out, this “DOOL” news could be setting up her exit. It’s tough to imagine that Paige would take JJ back after he hooked up with her own mother. “Days of Our Lives” viewers may be saying goodbye to the character if Paige packs up and heads to Stanford as she previously planned.

So, DOOL fans, what do think about the recent developments for the young couple? Do you think the relationship can survive if Paige discovers the truth? Will Jennifer finally learn what her sneaky son has been up to? As a general rule, everything is found out eventually in Salem. It’s likely just a matter of time before JJ’s actions come back to haunt him. Share your opinion on the saga in the comments below and don’t forget to check CDL tomorrow for all the latest “Days of Our Lives” spoilers and news.