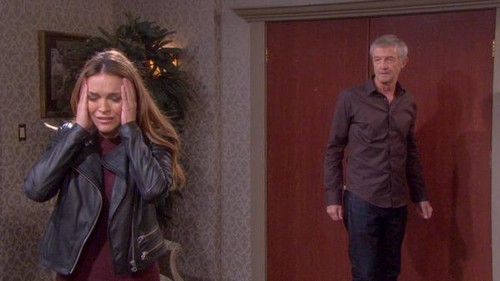 “Days of Our Lives” spoilers tease that the week of January 19-23 will be packed full of drama in Salem, and according to DOOL rumors, Days fans will not want to miss a single episode of the NBC soap. “Days of Our Lives” spoilers have been teasing a relationship between Melanie (Molly Burnett) and Brady for quite a while, and during the week of January 19th the new couple finally decides to go public and Melanie sits down with her dad Daniel and reveals to him that she has been seeing his close friend. Unbeknownst to Melanie, her and Brady’s relationship might not be as solid as she thought – because spoilers tease that Brady is still concerned about his old flame Theresa Donovan (Jenn Lilley) and is not happy when he learns she has a new boyfriend.

In other “Days of Our Lives” news, spoilers for the NBC soap reveal that during the week of January 19 Chad DiMera’s dark side resurfaces when he catches his girlfriend Jordan kissing her old lover Rafe. Although Jordan may not have reciprocated the kiss – Chad (Billy Flynn) automatically jumps to conclusions and decides that he has to make Jordan pay for betraying him. According to “Days of Our Lives” spoilers in the latest edition of Soap Opera Digest, Jordan’s (Chrishell Stause) overprotective little brother, Ben, gets involved and all hell breaks loose. Rumors have been floating around claiming that Ben winds up being thrown in jail – and there is a good chance that happens after he has a major blow-up with Chad over his sister.

“Days of Our Lives” spoilers also tease that during the week of January 19-23 DOOL fans can expect to see JJ and Eve share another hot and steamy moment. And Aiden’s (Daniel Cosgrove) dark side emerges when his son Chase invites Hope and her daughter on their special father and son vacation without asking him.

So, Days fans, do you believe the rumors that Aiden is a murderer? What will Ben get arrested for? Is Brady still hung up on Theresa? Let us know what you think in the comments below and don’t forget to check CDL tomorrow for more “Days of Our Lives” spoilers and news.