‘Days of Our Lives’ Spoilers: Eric Suspicious of Serena’s Behavior, Nicole Shares a Warm Moment with Someone Surprising 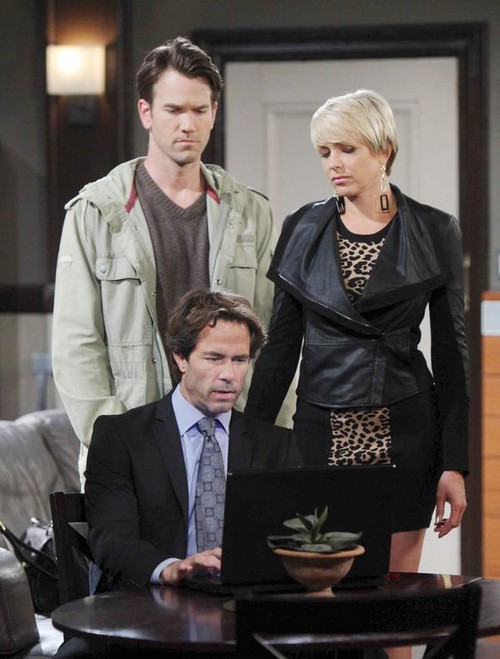 The latest “Days of Our Lives” spoilers reveal that Eric (Greg Vaughan) could finally start to see the light about Serena’s (Melissa Archer) scheming ways. Nicole (Arianne Zucker) has been trying to convince him that the new redhead in town isn’t all that she seems. DOOL fans know that Eric’s been slow to come around. Over the past few months, he’s been so full of hatred for his ex that he’d probably doubt her if she said the sun would rise. While Eric may not be ready to completely forgive her, it seems that he’s at least been listening to what she has to say. “Days of Our Lives” spoilers hint that he’ll begin to grow suspicious of Serena’s behavior and may wonder if Nicole has been right all along.

Eric’s revelation could be a breath of fresh air for “Days” viewers. Many DOOL fans have grown tired of his whiny “I hate Nicole” mantra. If Serena turns out to be conning him, an apology to his former lover could be the first step toward reconciliation. Despite what she might say, it’s unlikely that Nicole ever really got over the breakup. After all, she probably wouldn’t devote so much time to exposing Serena’s plot if she didn’t care for Eric deeply. Could we see “Ericole” give romance another try at some point? We’ll have to wait and see, but if nothing else, a civil friendship may be in the works.

Recent “Days of Our Lives” spoilers also indicate that Nicole will share a warm moment with someone surprising. Rumor has it that Melanie (Molly Burnett) may have some comforting things to say as Nicole grieves over losing Daniel (Shawn Christian). The fact that anyone is willing to show a bit of kindness is a good sign. Nicole’s been treated like the black sheep of Salem for far too long.

So “Days” fans, what do you think about Serena’s suspicious antics? Will she slip up and force Eric to admit he was wrong? If he says he’s sorry, should Nicole jump at the chance to reconcile or tell him where he can shove that apology? Would you be up for another round of “Ericole” or should they both just leave the past behind them? Let us know what you think in the comments below and don’t forget to check CDL tomorrow for the latest “Days of Our Lives” spoilers and news.