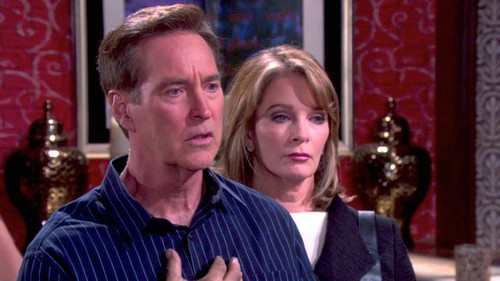 “Days of Our Lives” spoilers for Friday, April 10, tease that Sonny (Freddie Smith) will convince Paul (Christopher Sean) that his mother has been lying to him. Tori (Hira Ambrosino) told Paul that his father died long ago, but Will’s (Guy Wilson) research tells a different story. DOOL viewers know that Paul is John’s (Drake Hogestyn) is son and now it’s time for Paul to get the news as well. Paul will demand to know if it’s true that his father is living in Salem and John will hear Tori give Paul confirmation. It looks like we’re in for quite a show as Tori finally reveals her secret. To say that John and Paul will be stunned is an extreme understatement.

Other “Days of Our Lives” spoilers indicate that Ben (Robert Scott Wilson) will ask Clyde (James Read) for some help with a new issue he’s facing. Thanks to Stefano (Joseph Mascolo), Chad (Billy Flynn) discovered some information that could put Ben back in trouble with the law. It looks like Ben is hoping Clyde can smooth everything over for him. Clyde has been trying to make up for the past and he’ll be willing to do anything he can for his son. However, Ben should be wary of getting too chummy with Pops. It’s clear that Clyde puts himself before anyone else. Stick with “Days” to see if Clyde’s help will prove useful.

Meanwhile, Lucas (Bryan Dattilo) will have a chat with Kate (Lauren Koslow) about his love life. DOOL spoilers hint that Lucas will open up about his feelings for Adrienne (Judi Evans). Unfortunately, Lucas could regret giving Kate updates on his relationship. The rumors say Kate will betray Lucas if an effort to get back to work at Mad World. Victor (John Aniston) may want to replace Lucas when he hears what he’s been doing with Justin’s (Wally Kurth) wife. Of course, Kate undoubtedly believes she’d be the perfect fit for the job. Stay tuned to “Days of Our Lives” to find out if Kate will choose her career over her son.

So “Days” fans, what do you think about Paul and John learning the truth? How will Tori explain her actions? Will Clyde be able to help Ben with his problem? What about Lucas and Kate’s conversation? Will Lucas regret telling Kate about his new romance with Adrienne? Let us know what you think in the comments below and don’t forget to check CDL tomorrow for the latest “Days of Our Lives” spoilers, rumors, updates and news.