BY Heather Hughes on May 20, 2015 | Comments: 2 comments
Related : Days of Our Lives, Soap Opera, Spoiler, Television 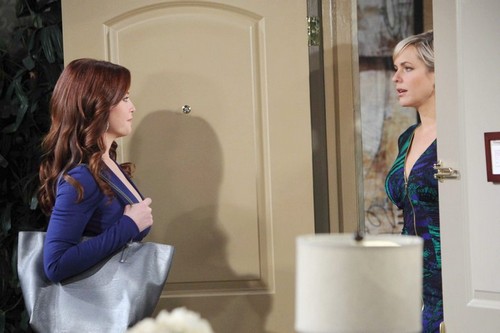 “Days of Our Lives” spoilers for Wednesday, May 20, tease that Eve (Kassie DePaiva) and Paige’s (True O’Brien) relationship may be damaged beyond repair. Eve was horrified to learn that Paige was in the other room and heard her entire argument with JJ (Casey Moss). Paige is now aware that Eve hooked up with JJ and tried to keep it a secret. The jig is up and Eve will have to own up to her actions. There’s really nothing Eve could say to ease Paige’s pain. It looks like Eve will have no choice but to take whatever Paige dishes out.

Meanwhile, ignorance will be bliss for JJ. With a little help from Jennifer (Melissa Reeves) and Maggie (Suzanne Rogers), JJ has planned a surprise party for Paige. JJ wants everything to be perfect for Paige’s birthday, but this is all about to turn into a complete catastrophe. JJ had visions of living it up with Paige in sunny California, but those dreams will soon be totally destroyed. Later this week on DOOL, Paige will declare that she knows about the affair and she’s officially done with JJ. 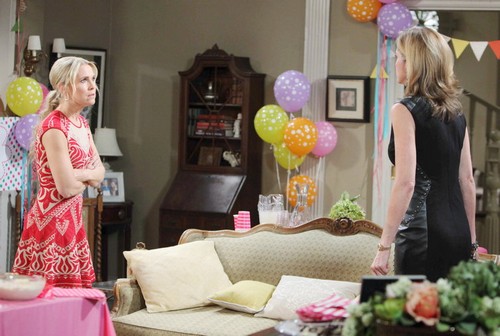 It seems another “Days” couple will continue to have struggles. “Days of Our Lives” spoilers hint that Adrienne (Judi Evans) will be livid after she eavesdrops on Justin’s (Wally Kurth) phone call. Perhaps Justin will have a conversation with Elsa, the coworker he admitted to cheating with. Then again, maybe Justin will keep meddling in Sonny’s (Freddie Smith) love life by contacting Paul (Christopher Sean) again. Of course, we can’t count out the possibility that Justin could give Lucas (Bryan Dattilo) a ring to give him a piece of his mind. Bottom line, Adrienne won’t be happy with whatever updates she hears. Adrienne will rip into Justin and it could drive them even further apart. DOOL rumors say that this troubled couple will work things out in the end, but it’s going to be a long road to reconciliation.

Other “Days of Our Lives” spoilers reveal that Nicole (Arianne Zucker) will have a tough time explaining why she’s at Daniel’s (Shawn Christian) apartment. Nicole called the superintendent to let her in, but Xander (Paul Telfer) showed up first and he didn’t look pleased. Now Nicole will have to come up with an explanation that will satisfy Xander without blowing her cover. Nicole is extremely close to learning Xander and Serena’s (Melissa Archer) secret. The last thing Nicole wants to do is tip them off. Unfortunately for Nicole, Xander and Serena already know that Nicole is getting close to the truth. Stay tuned to the NBC soap to see if Nicole can talk her way out of this mess.

So “Days” fans, what do you think about the news that JJ’s dreams are about to be dashed? Does JJ deserve whatever he has coming? Who will Justin have on the other line? Will Nicole be able to throw Xander off track? Let us know what you think in the comments below and don’t forget to check CDL tomorrow for the latest “Days of Our Lives” spoilers, rumors, updates and news.