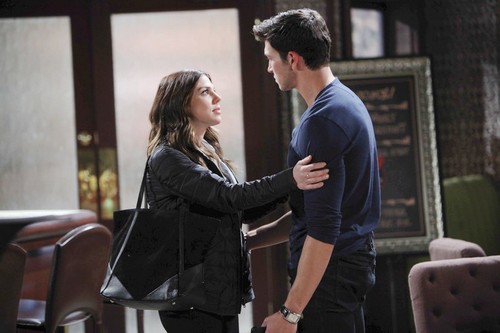 “Days of Our Lives” spoilers tease that the killer will be exposed on Thursday, September 24. Nevertheless, there’s bound to be twist coming. It’s awfully early to spill all the details when this storyline is expected to continue for several months. Perhaps the killer will be revealed to Will (Guy Wilson), who is presumed to be the murderer’s third victim. If the audience gets a peek, then we’ll undoubtedly see at least one copycat killer take the reins. This mystery is meant to be muddled. It’s about keeping DOOL viewers guessing.

With that in mind, let’s take a look at one of the many possible suspects. Ben (Robert Scott Wilson) has become quite possessive of Abigail (Kate Mansi) lately and he’s always had a hot temper. Ben saw Chad (Billy Flynn) with Serena (Melissa Archer) the night she was murdered and then went home to hit the sheets with Abigail. However, Ben mentioned that he’d been out to get muffins for Abigail early the next morning. In reality, Ben could’ve slipped out just after Abigail fell asleep and headed off to do the deed.

As for Paige (True O’Brien), she was likely followed back to her dorm after her encounters with Rafe (Galen Gering) and Chad in the town square. Just before she dashed to her room, Paige called JJ (Casey Moss) and announced that she needed to tell him something. It was almost as if Paige had suddenly remembered a clue about the night Serena was killed. Could Paige have recalled that Ben was lurking nearby? It’s a possibility.

After all, Paige would know that JJ’s sister was dating Ben. In fact, Paige knew Ben as a waiter named Kevin when they were both living in Florida. There’s also the issue of the killer getting in Paige’s dorm. Considering Ben’s age and status as college student, he wouldn’t look out of place roaming around campus. In other words, it wouldn’t have raised any red flags and Ben could’ve gone undetected.

Now that Abigail forced Ben to delete the tracking app, it seems like he’s on the verge of a breakdown. Ben is obsessed with the idea that Abigail is still in love with Chad and she’s giving him every reason to believe it. Next week on “Days,” Ben will have a major blowup when he catches Chad and Abigail getting a little too close for comfort. The very same day, someone will try to strangle Marlena (Deidre Hall). Maybe seeing Chad and Abigail together will cause Ben to snap once again. Since Marlena put Chad under hypnosis, Ben might want her out of the picture so she wouldn’t expose any of Chad’s memories.

It appears Marlena will survive the attack. “Days of Our Lives” rumors suggest that Will could become the victim instead. In spite of all the evidence, there are a couple of minor snags in the speculation that Ben’s the killer. The biggest problem is simply the fact that Ben may not be smart enough to pull all this off. Ben isn’t exactly the brightest bulb in the box. Of course, there’s a chance that Ben’s doing the killing and Clyde (James Read) is the one responsible for framing Chad. Clyde would have access to the drugs that caused Chad’s blackouts and he’s clearly got the mind of a criminal.

We should consider the shock factor, too. Would Ben really be a shocking reveal? With so many signs pointing to Ben, the show may be using him as a way of throwing us off the trail. Still, word has it that Robert Scott Wilson may wrap up his time on “Days” by early next year. That also happens to be when DOOL’s murder mystery is expected to fully resolve. Will we learn Ben is to blame for the string of killings? Stick with “Days of Our Lives” for updates on Ben’s downward spiral.

So “Days” fans, what do you think about the news that the killer will be revealed on September 24? Who will it be? Is Ben one of your top suspects or is he too obvious? Could Clyde be part of this, too? Voice your opinion in the comments below and don’t forget to check CDL often for the latest “Days of Our Lives” spoilers, rumors, updates and news.