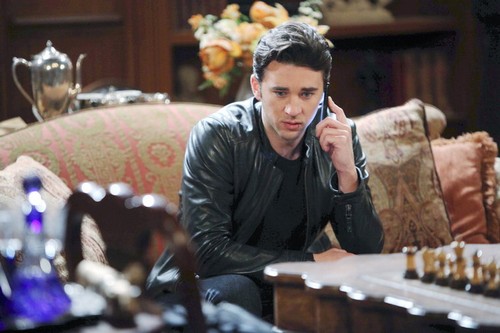 “Days of Our Lives” spoilers for Friday, September 18, tease that Marlena (Deidre Hall) will use hypnosis to draw out some of Chad’s (Billy Flynn) memories. Abigail (Kate Mansi) is hoping that this could be Chad’s ticket to clarity. If Chad can remember what happened during his blackouts, he might be able to learn who’s been framing him. However, Chad is worried that he could realize he’s indeed the killer. Abigail will wait anxiously as Chad and Marlena get down to business. There’s a lot riding on this hypnosis. In fact, Chad’s life may depend on it.

As it turns out, Marlena’s life is on the line as well. By helping Chad, Marlena is essentially putting a target on her back. The killer will come after Marlena next week on DOOL. “Days of Our Lives” rumors say that Will (Guy Wilson) may even get himself mixed up in all of this and die in the process. It’s an unfortunate situation, but it’s sure to bring big drama for “Days” viewers.

In the meantime, Gabi (Camila Banus) will relax with Will and Arianna (Harper and Sydnee Udell). Will was stunned by how fast Gabi was released from prison. Suddenly, Gabi was back in Ari’s life and Will couldn’t be happier to see them reunited. Of course, now that we know death is knocking on Will’s door, it should make these moments bittersweet. At least Gabi will have a chance to spend a little time with Will before he becomes a victim.

Will’s murder isn’t the only shocking event that’s about to shake things up. Gabi’s father, Eduardo (A Martinez), will arrive in Salem on Monday. When he first comes on the scene, Eduardo’s main concern will be seeing his ex, Eve (Kassie DePaiva). DOOL rumors indicate that Eduardo is Paige’s (True O’Brien) dad and he’ll want to avenge her death. It won’t be long until Eduardo reaches out to his other children in town. “Days of Our Lives” spoilers reveal that Eduardo won’t receive a warm welcome from Gabi and Rafe (Galen Gering). Stick with the NBC soap to see if Eduardo can make amends.

So “Days” fans, what do you think about the news that Marlena will hypnotize Chad? Will Chad remember anything important? How will Gabi and Ari cope once they get updates on Will’s death? Are you anxious to see Eduardo stir up trouble? Let us know what you think in the comments below and don’t forget to check CDL often for the latest “Days of Our Lives” spoilers, rumors, updates and news.