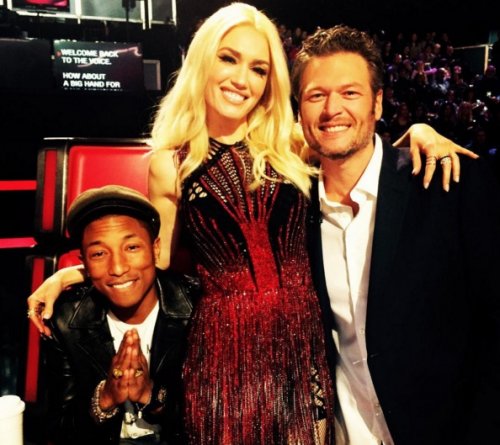 Is Gavin Rossdale trying to steal Gwen Stefani back from her new boyfriend Blake Shelton? Blake and Gwen may not have spent Thanksgiving together – but the couple reunited shortly after the holiday and are still very much dating.

Gwen and Blake’s relationship took a lot of people by surprise – but no one was more shocked than her soon-to-be ex-husband Gavin Rossdale. Gwen filed for divorce just four months ago.

While Gwen Stefani seems to be flourishing since their break-up, Gavin Rossdale not so much. Since Gwen filed for divorce, Gavin has been spotted out on numerous occasions partying like a rockstar (even more than usual).

And, he STILL has not taken off his wedding ring, which is generally a pretty big clue that he is not ready to move on. Gavin has been also spotted with more “mystery women” than we care to count over the course of the last few months.

Gavin being out with these women is an obvious attempt to try and make Gwen Stefani jealous – or to remind her of what she is missing out on. It’s safe to say it is not working…

At this point, Gwen Stefani seems pretty happy with country music singer Blake Shelton. But, the fact that she is still technically married to Gavin Rossdale and has three children with the rocker does mean that he is still alive in the competition.

If Gavin plays his cards right and gets his act together – it is not entirely impossible to think that he has a chance to win Gwen Stefani back. Especially if Blake Shelton slips up between now and then.

What do you guys think? Is Gavin Rossdale still hung up on Gwen Stefani? Do you think there is a chance he could successfully steal her back from Blake Shelton? Let us know what you think in the comments below!