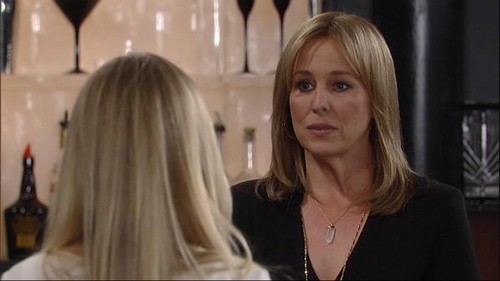 Summer is heating up in Port Charles – check out these “General Hospital” spoilers for the Tuesday, June 16 episode of the hit ABC soap. Tracy Quartermaine (Jane Elliot) shows up and catches Dillon Quartermaine (Robert Palmer Watkins) dialoguing with Luke Spencer (Anthony Geary), Laura Spencer (Genie Francis) and Lulu Spencer (Emme Rylan). Will Dillon come clean to Tracy about the break-up lie that Luke told her or will Dillon keep his mouth shut as a favor to Lulu? Spoiler alert – he’ll keep his lips zipped!

To help figure out the Lucky Spencer (Jonathon Jackson) kidnapping mystery, Luke will think back on his own troubled childhood for clues. Tracy isn’t willing to give up on the answers she wants and will keep prodding until she gets someone to come clean. When Tracy can’t get Luke or Dillon to fess up, she’ll hone in on Lulu to try and get her to blab the Spencer family secrets.

And speaking of secrets, Ava Jerome (Maura West) will make it clear to Silas Clay (Michael Easton) that the only way to know she’ll stay far away from Morgan Corinthos (Bryan Craig) is if Silas keeps her romantic attention instead. So Ava will move from actual blackmail to emotional blackmail. Will Silas bed Ava to protect Kiki Jerome (Haley Erin)? Won’t be the worst thing he’s done lately.

Morgan will lie to Kiki about the secret he’s keeping – i.e. Morgan making out with her mom/aunt Ava/Jerome. Kiki knows something is up after she walked up on Morgan telling Sonny Corinthos (Maurice Benard) that they needed to keep “it” from Kiki. Morgan will make up some nonsense to keep Kiki off his trail and despite his best intentions, he’ll have his lips on Denise again very soon.

TJ Ashford (Tequan Richmond) has a growing storyline in the works so this jail experience he’s having may be a good breeding ground for his future. Ric Lansing (Rick Hearst) will rail at Jordan Ashford (Vinessa Antoine) for letting TJ spend the night in jail over a bogus arrest. Sonny is in court to help out TJ and will get the kid cut loose, but TJ’s appreciation could bode ill for the Ashfords.

We know TJ was enamored of Shawn Butler (Sean Blakemore) and never cared that Shawn was in the mob. Both TJ and Jordan will owe Sonny a solid when he gets the kid cut loose. Jordan won’t like owing Sonny, but TJ won’t mind. And Sonny and TJ may even make a plan for TJ to help Sonny reclaim the now abandoned Jerome territory since Julian Jerome (William deVry) has gone legit.

And speaking of Julian, whom we haven’t seen in a while, now that Kyle Sloane (Grayson McCouch) and Nikolas Cassadine (Tyler Christopher) both know that Julian’s baby with Olivia Falconeri (Lisa LoCicero) is alive and well, how long will it be before Julian finds out? And what will Julian do once he finds out that Olivia lied to him? It won’t be pretty.

Also on the mob front, Scotty Baldwin (Kin Shriner) is on the warpath – as usual – and wants Sonny back behind bars. That never works out, but Scotty just can’t keep trying. Maybe he should focus on reigniting his relationship with Bobbie Spencer (Jacklyn Zeman) instead of continuing to spin his wheels with the Corinthos mob.

Don’t miss a moment of Tuesday’s GH then come back to CDL often for tons more “General Hospital” spoilers, news and gossip.