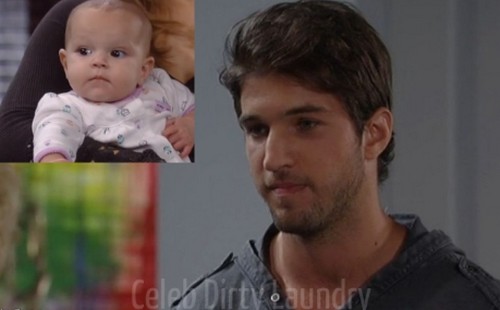 General Hospital spoilers look at who is really the baby daddy of Avery and mother of Kiki Jerome – who is Silas Clay’s murderer will be addressed as well. Dr. Silas Clay (Michael Easton) was found face down on his apartment floor with Nina Clay (Michelle Stafford) hovering over him holding a knife which leads us to believe Silas was stabbed – and you know what they say about stabbings – the majority are up close and personal… one name rings loud and clear, Ava Jerome (Maura West).

TPTB have sent Michael Easton’s character off canvas before several other potential storylines have wrapped up. For instance when Carly Corinthos (Laura Wright) had Silas do baby Avery’s DNA test many would argue they heard Carly say “thanks for fixing this” – others would say she was thanking him for getting the test back so fast. When Carly had this test done she and Sonny (Maurice Benard) were in the middle of rekindling their love affair. Carly had huge issues with the cougar mobstress Ava Jerome seducing her barely out of teens son Morgan Corinthos (Bryan Craig). Carly protects her cubs whether they want to be protected or not and this is the perfect case of Mama Lion intercepting a colossal lifetime mistake Morgan has made in her eyes.

Why did Carly take it upon herself to have the DNA test on Avery done? People can argue that she wanted to know if her lover Sonny was the baby daddy but in the end Carly was looking out for son Morgan. She could not bear the thought of her son being connected to this evil female sociopath for the rest of his life – Carly is adult enough to understand Sonny is no saint and has several children with multiple mothers so what is one more?

When Carly showed up at the hospital Silas was standing behind the counter with the DNA results as Carly rushed in leaning over, thanking him for “fixing this ” or “the speedy Results.” Social media groups have debated this into the ground.

Soap reality implies Morgan is Avery’s daddy, not her brother. When Silas’s murder is wrapped up this revelation will come out because it will tie into Ava going to prison for the murder of both Connie Falconeri (Kelly Sullivan) and Silas Clay. Morgan will be totally devastated when he learns murdering Ava has been alive and well, lying yet again to him & playing him for a fool with that cheesy accent and Halloween wig as Denise DeMuccio. Carly hates Ava Jerome with every ounce of breath in her and would stop at nothing to get Ava’s tired nasty presence out of her son’s life.

Another storyline that Silas will not be around to see stems from the fact that Kiki Jerome (Hayley Erin) is in fact his and Nina’s child. Nina Clay was in a coma for 20 years – about the same age as Kiki Jerome. When Ava arrived in town in 2013 she stalked Dr. Clay because she was in fact still in love with him. She hated the fact that he was with Sam Morgan (Kelly Monaco) at the time so she told Silas he was Kiki’s father rather than Franco (Roger Howarth).

The truth is Silas is Kiki’s father and in fact the DNA proved that BUT they did not do a DNA test on the mother because no one suspected Ava was not Kiki’s mother. The truth is Ava is not Kiki’s mother – Nina Clay is and eventually this revelation will be revealed or will they shelf this for several more years? The fact is evil greedy Madeline Reeves (Donna Mills) took her own grandchild and gave it to Ava to get out of town. Why would a grandmother do this? Let us count the ways. Madeline’s whole reason for living is money and since her late husband left his filthy rich estate to his beloved daughter Nina, Madeline needs to get rid of her to get her hands on it and is in the process of doing so even now. If Nina had a child then that would bump greedy grandma down the inheritance list and Madeline is no spring chicken – she needs the dough now. The bottom line is Madeline paid Ava off with Silas’s baby, banishing her and the baby forever.

How coincidental is the fact that Kiki is just out of her teens making her 20, the age Nina’a missing baby would be. The biggest obvious soap hint would be that Nina hates her so much, in true soap fashion people who start out hating each other are usually related.

This revelation may come out after Kiki loses both parents – one to be being killed and the other to prison. Let’s hope the new writers will give Kiki a parent in Nina because once Ava is gone who will she have ties to in Port Charles, her Grandma Delia (Ilene Kristen)? No, that is Ava’s mother so reality is not blood – she will have Madeline Reeves as a grandmother the lucky girl. Madeline would try to bump off her own grandaughter for that estate.

We all know if you are not related you are a soap goner so let’s wait with bated breath to see if they finally reveal Kiki’s true paternity – the biggest shame of all is that Silas will not be around for these big reveals. There was plenty of story for Dr. Clay so it is a shame that the writers could not write Silas out of the boring drab corner Ron Carlivati put him in. Michael Easton will be missed, he is a very talented and loved actor. Stay tuned as the murder mystery of Silas unravels on ABC’s GH. Please leave your thoughts and comments in the CDL comments below.