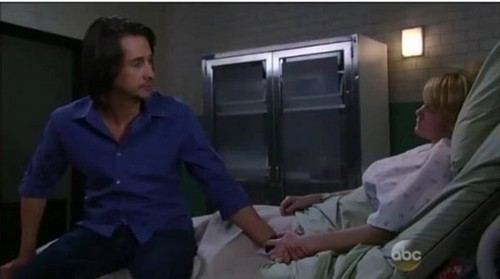 General Hospital spoilers and rumors examine the burning question ‘Did Ava Jerome [Maura West] really have Cancer?’ Let’s take a look at all of the GH circumstances leading up to her cancer diagnosis. Ava has had one heck of a year. Ava delivered a baby at the hands of her kidnapper deranged Nina Clay [Michelle Stafford]. She was on the run from Sonny [Maurice Bernard] who had a hit out on her for the murder of his fiancee Connie Falconari [Kelly Sullivan]. When the truth came out that Ava did murder Connie the cops put her in Pentonville.

Ava went through some tough lessons while in the big house and had to escape no matter what the price was. Just so happened that her brother Julian [William DeVry] and her alleged baby daddy Sonny were doing time also so they all devised a plan to bust out! The prison break was dangerous and there was bloodshed and some of that blood was Ava Jerome’s. Ava was shot by her once trusted crony Carlos Rivera [Jeffrey Vincent Parise] who started to finish her off when she fell over a bridge rail – Carlos left her for dead. Ava was hanging on under the bridge for dear life and who stumbles upon her but her worst enemy Sonny Corinthos!

How ironic as Sonny had been trying to kill her for months and now he must save her life because he made a deal with mob rival Julian Jerome. Sonny grabs Ava’s hand and tries to pull her up, she is screaming she cannot hold on that she has been shot, Sonny tries with all of his might but Ava lets go and falls into the dark waters never to be seen again… not by the Mob or PC cops anyway. Ava ends up with ex lover and Kiki’s father Dr. Silas Clay [Michael Easton]. Silas tells her he has to turn her in for murdering Connie she begs him not to that she is sorry and that she has a baby girl she needs to see.

Silas takes pity on her and starts nursing her back to health but fears he will be in trouble for aiding and abetting a murderer. Silas takes her to an unknown location in Upstate New York where he is tending to her wounds – he has a medical bed set up in a medical-looking environment, very dark and quiet. It is here where Ava and Silas have a heart to heart making every viewer need a tissue. The scenes were Maura West’s best, she humanized Ava and it was at this moment when viewers forgot Ava was so cold-blooded. Ava explained how sorry she was for everything she ever did and that she painfully regretted shooting Connie, an innocent woman who did not deserve to die. Ava told Silas that she will always love him and that he would always have a special place in her heart – Silas who rarely shows emotion teared up as they reminisced about the good times and how he could have treated her better – he also apologized for his mistakes. If Ava didn’t have prison staring at her when she got well they could try to have another life together but that wasn‘t going to happen, or was it?  Did GH writers have something else in mind?

Shortly after that talk Silas asked Ava if she was feeling fatigued or run down? She said she had been but that she thought it was because of having the baby, being in prison and getting shot. During this time with Ava, Silas grew to be very close to her and you could see the love they both share for each other without them even saying a single word. Silas will do anything to save Ava’s life at this point. Silas tells Ava he took blood because he needed to run tests when he removed the bullet and he told her she had a terminal cancer and that the only thing that could save her was a DNA bone marrow transplant.

Ava is devastated about this news and thinks he’s lying, he told her he would not lie about something like this and he is going to try to find a bone marrow match. Ava is getting weaker and more gaunt every day. Turns out neither Kiki [Hayley Erin] , Delia [Illene Kristen] nor Julian are matches. Silas must get baby Avery’s bone marrow to check it but Ava is adamant there is now way she will allow him to take baby Avery’s bone marrow. Every day we watch Ava get weaker and weaker with Silas injecting her with meds supposedly to help her through this until he can find a match. It gets so bad that Ava wants Silas to assist in her suicide. Silas is not happy with her request but agrees he will “help her,” and help her he does!!

In what was great General Hospital drama, Silas makes another trip to PC and Ava thinks he will help kill her – but Silas got in, snatched Avery, he did the bone marrow procedure on Ava and got Avery back to her playpen at Morgan [Bryan Craig] and Kiki’s. When Ava wakes up from her “supposed death trip” she asks Silas why she is still alive! He eventually tells her he took Avery’s marrow and that he could not let her die!

Let’s take a look at Silas for a minute, Silas has always been a character who tried to play by the rules, actually to a point of being boring. Ava is everything he isn’t and yet he still stood by her, he has a soft spot in his heart for her. Did Silas lie to Ava and tell her she had cancer and only a bone marrow transplant could save her KNOWING that bone marrow can change a person’s DNA? Was he injecting her with something everyday making her think she was weak and dying when really he was just sedating her and put it in her head she was sick so she started believing it? Does Silas love Ava so much that he came up with this amazing plan to save her from Pentonville Prison and a potential Sonny assassination by making her disappear – by turning her into Denise?

How does Ava bounce back so fast looking radiant after being so close to dying with cancer? If Ava was never really sick she didn’t have much to bounce back from except from a gunshot wound. Is Dr Clay smarter than we give him credit for – did he knew exactly what he was doing. Did Silas create a new person by slightly altering Ava’s DNA via a bone marrow transplant?

Let’s Fast Forward to Denise DeMuccio and there you have it. The results of all of Dr Silas Clay’s efforts produced a safe, living, breathing gum chomping and FREE from prison Ava, correction Denise DeMuccio. Do you think Denise is really Ava? Do you think Silas came up with this plan to save Ava from Pentonville Prison and potential Sonny wrath? Will Silas and Ava get together after all is said and done? Stay tuned to ABC’s GH as this story is just warming up in what is guaranteed to be a sizzling summer! Come back to CDL for more General Hospital spoilers, rumors, and news.