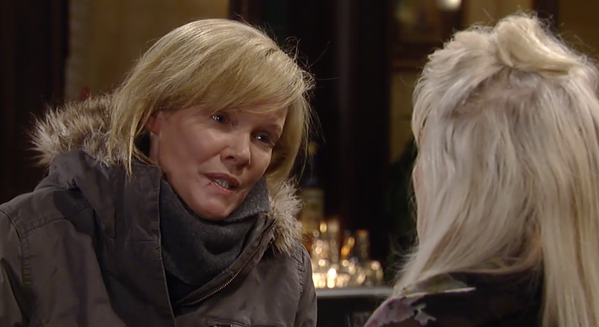 Enjoy these “General Hospital” spoilers for the ABC soap for Friday March 6. Yesterday was a day of interesting movie references on “General Hospital” – some that were obvious and some more subtle. But all hint at future story lines.

Luke Spencer (Anthony Geary) attacked Scott Baldwin (Kin Shriner) and nearly bit his ear off Mike Tyson style. This culminated in Luke being trussed up like Hannibal Lecter in Silence of the Lambs and dropped off at Shadybrook. Once Franco (Roger Howarth) found out that Luke had attacked his dad, he goes to confront Luke and does The Princess Bride quote (slightly altered).

Franco said, “My name is Franco Baldwin, you hurt my father, prepare to die.” Fans of the movie know it was “My name is Inigo Montoya, you kill my father, prepare to die.” It was a lovely homage and gave me a smile. Recent spoilers indicate that Franco and Nina Clay (Michelle Stafford) were going to team up with someone new at Shadybrook, but this doesn’t sound like what’s happening here.

What’s more, rumor has it that Franco and Nina were plotting to get free of Shadybrook but with Luke there now, seems like Franco will want to stick around. If Franco can get past the whole Luke biting his dad’s ear off, maybe the three nut jobs will team up to wreak havoc and the lunatics can run the asylum! My money is on Luke convincing them to help him make trouble, but the question is, will it be Luke or Fluke that Franco and Nina are dealing with?

And on the Fluke front, once Damien Spinelli (Bradford Anderson) gets done locking lips with Maxie Jones (Kirsten Storms) and upsetting Nathan West (Ryan Paevey) in the process, he’ll hone in on the location of the missing Spencer sibling Patricia. Next week, look for Sam Morgan (Kelly Monaco) and the Jackal to team up to track her down and get some answers about Luke’s DID.

And on the custody case, we saw that Judge Walters gave custody of baby Avery to Michael Quartermaine (Chad Duell) but will he actually get his hands on his sister? Right now, Ava Jerome (Maura West) has the baby in her arms and is trying to walk out of her memorial with the child. Silas Clay (Michael Easton) is trying to stop her, but will she listen or will she kidnap her child and take Avery on the run with her?

And even if Ava doesn’t kidnap Avery, Sonny Corinthos (Maurice Benard) will try and use Morgan Corinthos (Bryan Craig) to keep Avery out of Port Charles and out of Michael’s hands. The real question is will Morgan’s loyalty to his father overrun his common sense? Kidnapping a child is a felony and that’s the last thing that Morgan needs. But then again, we know Morgan is angry at Michael over the custody suit. But they may try to buy time while Ric Lansing (Rick Hearst) files an appeal.

Speaking of Ric, “General Hospital” spoilers indicate that Liz Webber (Rebecca Herbst) is going to tell Ric that she’s into Jake Doe (Billy Miller) and isn’t sure anymore how she feels about Ric. He won’t be happy about this and if Ric and brother Sonny have a chat about Jake, they may team up to take the guy down. The tension between Ric/Sonny/Jake will increase in coming days once Jake goes undercover for Commissioner Sloane (Grayson McCouch) in the Jerome crime family for Julian Jerome (William deVry).

Michael reportedly will make a job offer to Sabrina Santiago (Teresa Castillo) likely to help out with baby Avery. But Kiki Jerome (Hayley Erin) will not like this since she knows Sabrina was tampering with Ava’s medications while she was preggers with Avery causing her to go into premature labor and leading to the whole Nina kidnapping debacle.

Today’s episode should be big – Fridays are always great for edge of your set cliff hangers. Check back with CDL daily for “General Hospital” spoilers and rumors about all your favorite Port Charles characters.