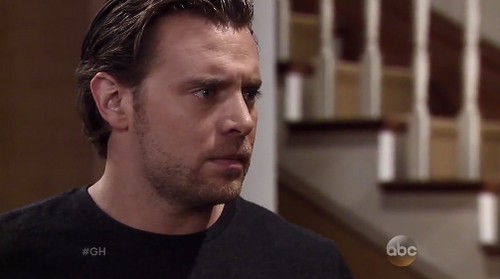 Get ready for more mob action on the Wednesday September 23 GH episode – here are some “General Hospital” spoilers to get you ready. Carly Corinthos (Laura Wright) invokes Sonny Corinthos’ (Maurice Benard) name to try and guilt Morgan Corinthos (Bryan Craig) into seeing Dr Kevin Collins (Jon Lindstrom) about what she sees is his obvious bipolar spiral. Michael Quartermaine (Chad Duell) joins the Greek chorus cautioning Morgan about his actions, but will it be enough to get Morgan to agree? Looks like the youngest son will remain stubborn.

Alexis Davis (Nancy Lee Grahn) is very concerned about the beating Julian Jerome (William deVry) took. Alexis is actually much more afraid of what Michael will do than what Morgan could do after Michael delivered that brutal kick while Julian was down. She tells Julian she’s concerned Michael or Sonny will send someone else to kill him in retribution for Sonny’s injuries.

Julian tells her he loves her and is grateful that she was willing to stand by his side while his life was being threatened. Julian realizes he has to find out who really shot Sonny – will Ava Jerome (Maura West) provide the information he needs? Or will Ava protect Paul Hornsby’s (Richard Burgi) secret because it better serves her own needs even though it puts Julian at risk?

Dillon Quartermaine (Robert Palmer Watkins) warns dad Paul that acting as DA means he’ll be taking on the mob. Paul will play modest and say he understands and can handle it. Dillon considers taking Maxie Jones’ (Kirsten Storms) advice and opening his heart up to his dad. Also, anyone notice that Maxie and Dillon have great chemistry? Nathan West (Ryan Paevey) and Lulu Spencer (Emme Rylan) won’t like this.

Ava calls Scotty Baldwin (Kin Shriner) and tells him she wants him to go to court to get her daughter Avery back from Sonny. Scotty still wants his $5 million, but Ava will push him off on that for now. Also – are Ava and Scotty about to get romantic? Did you notice Scotty has mentioned how attractive he finds her several times and the congratulatory hug in court seemed very intimate for attorney-client?

Liz Webber (Rebecca Herbst) sees her lies unraveling now that Sonny is calling attention to the similarities between Jake Doe (Billy Miller) and Jake. Liz pressures Jason to set a date for their wedding and they do. She’s happy for now, but her schemes are rapidly closing in on her. Jake will also pledge to stick by Michael throughout this ordeal even though Liz won’t like it. We expect Jake to become the Corinthos’ enforcer under Michael’s leadership while Sonny struggles to recuperate.

Sam Morgan (Kelly Monaco) tells Patrick Drake (Jason Thompson) that she can’t stop thinking about Jason on their anniversary. This will send her on an emotional journey that will lead her to accept Patrick’s proposal. But first, Sam has to go on a walkabout to get to that point. Patrick is willing to be patient, for now, and it will pay off for him soon.

Also, who else is excited to see what will happen with Ric Lansing (Rick Hearst)? His back is against the wall again – he’s lost Nina Clay (Michelle Stafford), his DA job, his shot at millions, and his position at Sonny’s side. With Michael taking over the Corinthos mob syndicate, Ric will no longer be consigliere. What will Ric do next? Ric is always at his best (and acting his worst) when he’s desperate. Can’t wait!

Don’t miss a moment of Wednesday’s GH and check back with CDL for more “General Hospital” spoilers, gossip and more.