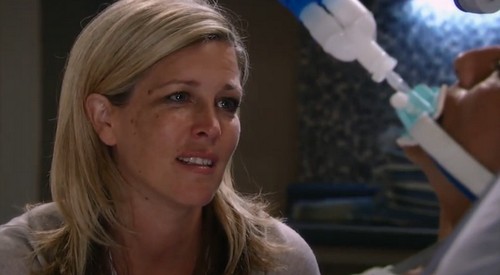 Sonny Corinthos (Maurice Benard) and Carly Corinthos (Laura Wright) are facing a huge struggle – check out these “General Hospital” spoilers about their wedding and the fate of their relationship. Not only is the wedding off, but it looks like their relationship could be on the rocks due to the fallout from Sonny’s shooting and the resultant physical injuries he’ll be left with for weeks to come.

Carly told Dante Falconeri (Dominic Zamprogna), Michael Quartermaine (Chad Duell) and Morgan Corinthos (Bryan Craig) they had to decide on the surgery but they pushed it back to Carly. Carly says yes on the risky surgery and Sonny will make it through, but will suffer some major ill effects. He may be wheelchair bound for a while and unable to walk or bedridden for an extended time.

And if we know one thing about Sonny it’s that he hates being helpless. Remember Sonny cut off seeing Carly when she came to visit him at Pentonville because he knew there was nothing he could do for her during his long jail term. He also struggled with his bipolar diagnosis and pushed her away. Any time Sonny is weak, he acts like a sick dog and goes to the corner and growls at people who try to help him.

That’s what we’re going to see in the coming weeks after Sonny comes out of his surgery with physical complications. Sonny will likely play the card of “you should have let me die rather than live like this” and will be angry and frustrated at his limitations. Carly will want to go ahead and get married but Sonny will tell her no and call it off because he doesn’t want to drag her down.

There were persistent “General Hospital” rumors that Sonny and Carly’s wedding would not occur until November sweeps then the September date cropped up. It looks like both dates were accurate, it’s just that one turned into a red wedding instead of a white one. Sonny and Carly will make it through this struggle like they have all the others and will set a new wedding date for November.

But that wedding may also go off the rails. There are a lot of rumors swirling about major action that could disrupt the latest Carly and Sonny wedding. We know that the Jake Doe (Billy Miller) reveal will also hit November sweeps and the big story is that either Laura Spencer (Genie Francis) or Damien Spinelli (Bradford Anderson) or both will blab the news at the Liz and Jake wedding – even though Jake will know by then.

Another possibly huge rumor is that Jasper Jax (Ingo Rademacher) and Brenda Barrett (Vanessa Marcil) could be back in town and the exes of the bride and groom could wreck the wedding and tempt the almost-married couple to rethink saying “I do” for the fifth time. It would be awesome to see those two back in Port Charles even if it’s just for a wedding-wrecking cameo.

The big question is whether Sonny and Carly will make it down the aisle this one last time. My money is on them getting hitched (and staying hitched) for a while this time – maybe even for good. Port Charles needs a stable mature couple to anchor the drama around them and those two are getting a bit too old to be romantic leads for other partners. Plus baby Avery deserves two stable parents.

Stay tuned to GH to watch Sonny and Carly fall apart then find their way back to each other yet again. And check back with CDL often for more “General Hospital” spoilers, news and more.