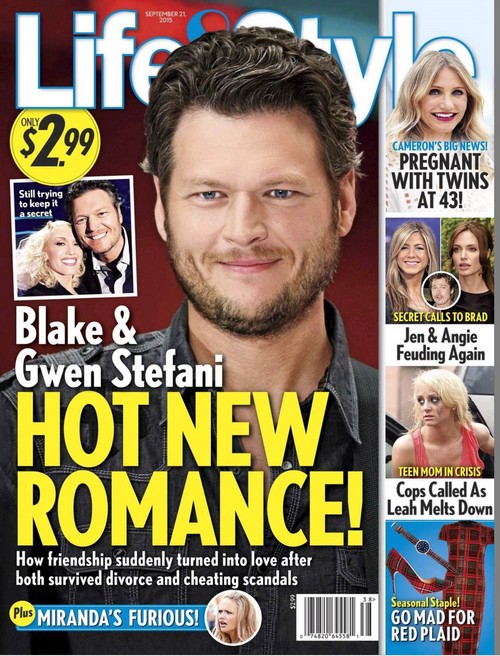 Gwen Stefani and Blake Shelton’s hot new dating romance may be ratings gold for ‘The Voice,’ but Stefani and Shelton’s relationship is making already jealous Miranda Lambert feel betrayed by Gwen. The rocker chic and country sweetheart were friends, but now that Gwen and Blake’s romance is no longer a secret, Miranda is fuming and hurt.

Blake Shelton and Miranda Lambert split nearly 2 months ago, igniting rumors of cheating scandals that plagued both Shelton and Lambert. Miranda was said to be hooking up with multiple men, and several reports claimed Chris Young was one of the guys Lambert cheated on Shelton with. Young later denied the infidelity, but Gwen Stefani can empathize. Gavin Rossdale was said to have had several affairs during the course of his marriage to Gwen with both women and men.

After ‘The Voice’ coaches became friends the “electricity” between Gwen and Blake grew, according to Life and Style. The rock icon and country crooner have been spending more and more time together. Gwen and Blake love to hang out in each other’s dressing rooms between takes and have “flirty, intimate lunches,” making them nearly inseparable. “When they’re not together, Blake has been calling her, too,” an insider shared with the mag. “He’s even given her some small gifts.”

Blake is clearly infatuated with Gwen according to the source. He loves that Stefani is a mother. Blake Shelton wanted to have kids “very badly” according to the report, but Miranda wanted to focus on her career. Gwen has three children – Kingston, Zuma, and Apollo – who she adores and dotes upon. Shelton loves her mothering nature and finds her maternal side “enticing.”

Miranda Lambert is not happy with Blake Shelton and Gwen Stefani’s romance. Before the country singing couple’s divorce, Lambert allegedly noticed sparks flying between Gwen and Blake. Basically, Shelton falling in love with Gwen Stefani is Miranda’s worst nightmare! However, executives at ‘The Voice’ are excited about Blake and Gwen’s romance. The drama will bring viewers and a fresh interest, which means higher ratings for the show.

What do you think of Gwen Stefani and Blake Shelton hooking up? Will ‘The Voice’ coaches new romance be good for the show? Will Miranda Lambert get over Blake’s love for Gwen? Let us know your thoughts in the comment section below.