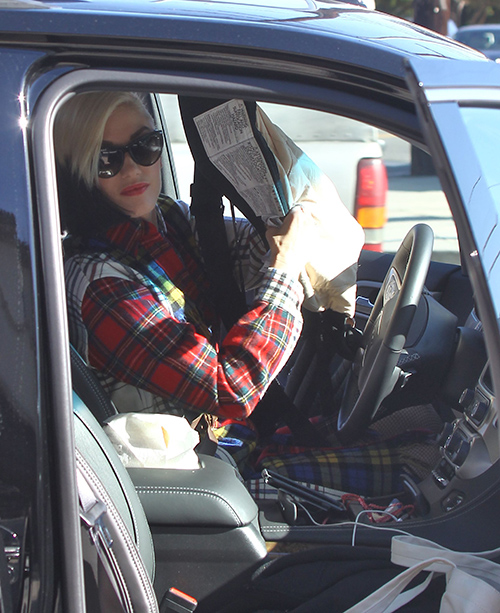 Gwen Stefani jetted off with Blake Shelton for a romantic getaway after dumping the kids with ex-husband Gavin Rossdale. The new couple traveled to Nashville to celebrate the engagement of a former contestant on The Voice. Gwen was kidless for the weekend because she left the boys behind with Gavin so she could get a little romance in with Blake.

As TMZ pointed out, Gwen and Blake look like they’re in it for the long haul. Season 9 of The Voice is over and Gwen still looks just as in love with Blake as when the show was fighting for ratings. Many thought the love connection might have been more of a made for TV thing but it turns out their love just might be real after all.

Blake Shelton was invited to the engagement party for one of his former The Voice contestants RaeLynn and her new fiance Josh Davis. Naturally, Blake took Gwen Stefani to the Christmas-themed party. RaeLynn was nice enough to share a picture of the newly engaged couple along with Blake and Gwen at the bash. It seems that Taylor Swift has made her mark everywhere because RaeLynn captioned her photo with the nauseating, “Squad.”

When fans of The Voice heard engagement party, of course that started rumblings of an engagement between Blake and Gwen, but he hasn’t popped the question just yet. Gwen Stefani and Blake Shelton may have been moving pretty fast in their whirlwind relationship and even met each other’s parents but both are still pretty fresh out of their respective divorces. The relationship is pretty serious though, that was proved when Gwen and Blake were photographed eating lunch in Studio City with Gwen’s son Apollo in tow.

Now that it’s looking like Blake and Gwen’s relationship is legit, fans are wondering when they’ll be getting married. The love birth The Voice coaches lasted past the season and still only have eyes for each other. They have spent time with each other’s parents and Blake Shelton is even hangout out with Gwen’s kids. There’s really nothing left for Blake and Gwen to do from here except get married or go on tour together, or both.