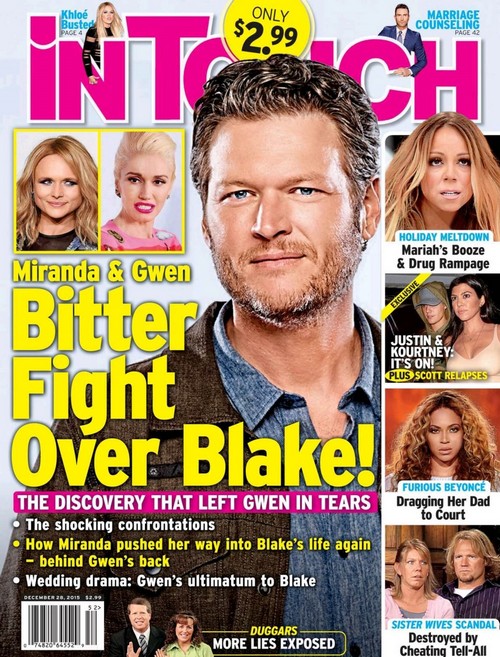 Has Miranda Lambert defeated Gwen Stefani? Is Blake Shelton returning to his ex-wife? Is there a battle for Blake brewing? Miranda allegedly started texting Blake during the Country Music Association Awards on November 4 begging the country music megastar to come and join some friends at an after- party.

Lambert is reportedly green with jealousy that her ex-husband has happily moved on with Gwen. Trying to get Shelton to come out and party was probably Lambert’s lame attempt to drive a wedge between the brand new couple.

Those in the know say that Miranda’s onslaught of texts hasn’t stopped. Recently Gwen happened to see a text from Miranda to Blake while hanging out backstage at “The Voice.” Allegedly Stefani stormed around looking for Blake and demanded a private conversation – but Blake didn’t have time. Sources told In Touch that Gwen lost it, ran off with “tears streaming down her face,” locked her dressing room door and refused to come out.

The sources say that Gwen supposedly found out that Blake had been replying to Miranda’s texts and this set off a firestorm. These texts back and forth between Shelton were allegedly inappropriate. Does Miranda think that Blake’s heart can be won back by a bunch of sexy text messages?

Knowing that Gavin Rossdale cheated on Gwen why would the singer risk losing Stefani? Blake and Miranda ended their short-lived marriage amid rumors that Lambert cheated on Shelton. Why in the world would Blake turn around and do the same thing that Miranda allegedly did to him and Gavin Rossdale did to Gwen?

Miranda Lambert reportedly is the one who can’t let go and is furious that Gwen and Blake might be planning a wedding and starting a family. Lambert never seemed interested in having children with
Shelton. As previously reported, those close to the former couple revealed that Shelton and Lambert constantly argued over her refusal to take a break from country music and get pregnant.

Now Blake Shelton has found love with Gwen Stefani and wants to get married and start a family. Miranda Lambert can text Blake all day long, that’s not going to change anything. “The Voice” coaches are in love and their relationship appears to be rock-solid.

Let us know what you think in the comments section below and come back to CDL for the latest celebrity gossip and news.