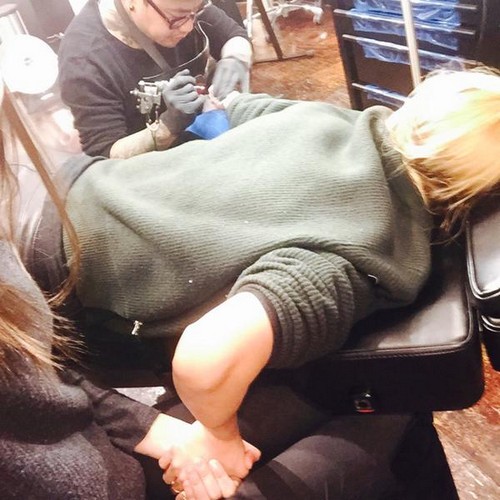 Hailey Baldwin and BFF Gabby Westbrook had some girl time in New York on January 15 in an effort to help Hailey get her mind off of being dumped by Justin Bieber and watching his reunion with Selena Gomez.

We had high hopes for Hailey Baldwin as she seemed to be a little less desperate than Selena Gomez when it comes to Justin Bieber. But we’re starting to lose hope as we’ve recently spotted Hailey pulling some of the shady games that Selena often played to get to Justin Bieber. Case in point, Hailey is trying to up her bad-girl image, as we all know Justin loves a sexy bad girl, by holding hands and leaning in super close to her best friend Gabby Westbrook while strolling the streets of New York on January 15, and by getting her first tattoo the day before. Of course Hailey posted pics and told fans that she was getting her first tattoo, letting everyone know she was sharing the momentous event with her bestie Gabby.

Hailey feels humiliated as her friends had pumped her up to believe she’d won Justin’s heart. Hailey and Justin even vacationed together in Turks and Caicos among her friends and family. It was then that Hailey believed she sealed the deal. It is especially embarrassing for Hailey to be dumped by Justin so soon because she runs in the same circles as Justin’s ex Selena Gomez. Hailey believed she and Justin would be the new power couple of 2015, leaving Selena in the dust. As CDL told you, Justin felt Hailey was moving too fast and after the vacation with her family and friends, he turned very cold toward Hailey making it clear he was over her.

Now, Hailey’s trying to seem as though she is unaffected by the split, but those close to her know she is really broken up and upset. Best friend Gabby quickly came to her side after Hailey called her crying over Justin and Gabby ’s trying to keep Hailey’s mind off of Justin. Now we’re just waiting on Hailey to post some pics that hint that she’s got another man to make Justin jealous enough to come running back. When will these girls learn? And seriously, it cannot be immature Justin Bieber that Hailey Baldwin is truly after. Hailey may have some ulterior motives of her own. She was virtually unknown until she started dating Justin. Stay tuned CDLers…you know where to come for all the latest in the Selena-Justin love triangle!