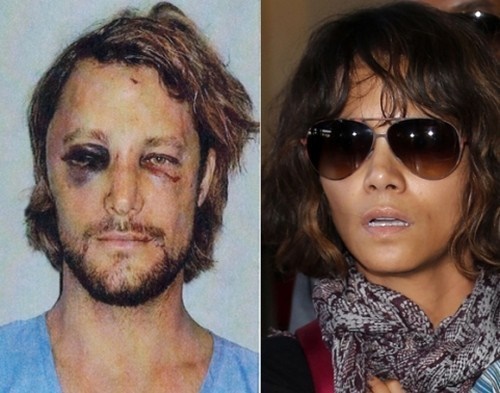 Halle Berry and Olivier Martinez have been in the news for all the wrong reasons of late, especially thanks to Olivier’s inability to control himself around paparazzi. In fact, a new report courtesy of the National Enquirer claims that Halle has had enough of Olivier’s violent outbursts, and has given him an ultimatum – get some anger management and calm down, or get a divorce.

For those who are unaware of Olivier’s violent tendencies, he knocked over an airport employee during a scramble from paparazzi in LAX on January 4th, and he also beat up Gabriel Aubry [Halle’s ex and her daughter Nahla’s father] outside of Halle’s home in the fall of 2012.

A source tells the Enquirer, “Now Halle is telling friends she worries that Olivier’s runaway temper could put her kids at risk.” However, Olivier is reportedly furious that Gabriel Aubry is keeping his family in Los Angeles and preventing them from moving to France, where Olivier believes that Halle and Nahla will be left alone.

While that may be true, a child is entitled to spend time with her father and that father is entitled to see his daughter. Halle Berry and Gabriel Aubry might have had some custody issues, but Gabriel’s not the one going around and beating up paparazzi and ex-boyfriends. If anything, Halle Berry might have to reconsider who she married, especially if Olivier doesn’t calm down and get his act together. I mean, every single time Halle Berry’s been featured in the media recently, it’s had something to do with Olivier Martinez – whether it was divorce rumors or Olivier’s violent fights.

What do you guys think? Will Halle Berry and Olivier Martinez get a divorce if Olivier doesn’t put a rein on his temper? Or will Halle end up moving to France and retiring from Hollywood completely? Let us know your thoughts in the comments below.