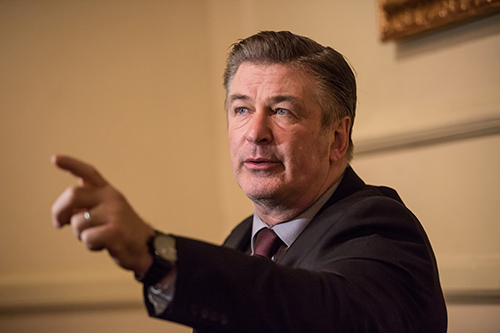 Is Hilaria Thomas convinced Alec Baldwin is cheating? There are rumors that Hilaria doesn’t trust Demi Moore and has resorted to stalking the co-stars on the set of the movie “Blind.”

Moore and Baldwin portray cheating lovers in the movie, and allegedly Hilaria feels threatened by how chummy Alec and Demi have been when the cameras aren’t rolling. Insiders reveal that Thomas is petrified that plot of the film could play out in real life. Buzz from the movie set is that Hilaria shows up unannounced just about every day – dragging the couple’s two children along!

A source dished to OK! that Hilaria Thomas feels like “a third wheel” when Baldwin and Moore laugh about old inside jokes from the time the actors worked together on the 1996 film “The Juror.” Hilaria sees this as a threat and reportedly asked Alec to “tone down his off-camera flirting with Demi.”

Those in the know reveal that Alec is just “being sensitive toward Demi because she’s endured so much heartbreak.” Alec Baldwin being sensitive? The same man who left a message on daughter Ireland Baldwin’s voice mail calling the youngster a piggy?

Are these sources referring to the man who went on a homophobic rant as “sensitive?” The exact same actor who was suspended for two weeks by MSNBC for those comments?

We could go on and on about Alec’s numerous insensitive actions all day. Rather than reassure Hilaria by backing off with the inside jokes and flirting is Alec just turning up the charm? It’s doubtful that Baldwin is being sensitive of all the heartache Demi Moore has endured – but we could be wrong.

Hilaria Thomas’ actions may be yet another move to put the spotlight on herself. Thomas is fond of posting photos of the Baldwin family on social media and enjoys giving frequent interviews.

Hilaria seems to think there is no such thing as TMI when it comes to her marriage to Alec. And now the Spanish-born beauty is on the set of Alec’s new movie, allegedly because she’s worried Demi Moore has eyes for Alec Baldwin.