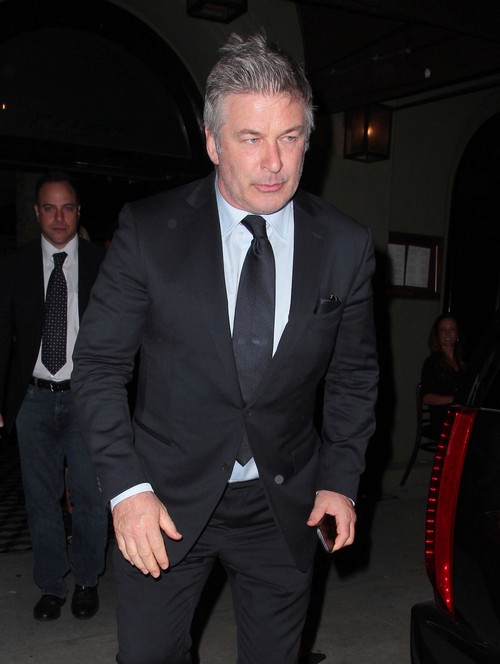 Alec Baldwin has made getting arrested and throwing belligerent rants in public an annual occurrence, and now he has another notch to add to his belt.

The 56-year-old actor was pulled over for riding the bicycle the wrong way up 5th Avenue in New York City, but then he had the audacity [and the idiocy] to swear and yell at the officers who pulled him over. The two female cops were just doing their job, but Alec decided to make everyone’s lives more complicated by yelling, “I don’t have ID. Just give me the f—g summonses.” Sources who were at the scene explained that he became belligerent the minute that the cops pulled him over, and that he started screaming and ranting at them.

Thus, instead of getting away with just a ticket or fine for breaking the law, Alec got arrested. He didn’t have his ID, but even then he probably could have managed to get away with just a ticket if it hadn’t been for his horrendous attitude. Anyway, he was brought to the 13th Precinct station house for a warrant check, but he reportedly displayed a negative attitude there as well. Sources who were present at the scene revealed that once there, Alec kept saying, “How old are these officers? They don’t even know who I am?” In the end, he was charged with disorderly conduct and going the wrong way on 5th Avenue [a one-way street], but he’ll likely escape jail time and just have to pay the $500 fine.

Of course, Alec then decided to tweet about the incident, as he always does. He tweeted, “Officer Moreno, badge number 23388, arrested me and handcuffed me for going the wrong way on Fifth Ave. Meanwhile, photographers outside my home ONCE AGAIN terrified my daughter and nearly hit her with a camera. The police did nothing.”

On the one hand, he has a point. The cops really should be monitoring paparazzi activity more, and I think that’s a movement that’s been building for a long time. However, Alec didn’t get arrested for going the ‘wrong way’ on Fifth Avenue, he got arrested for being a belligerent idiot who couldn’t keep his mouth shut.