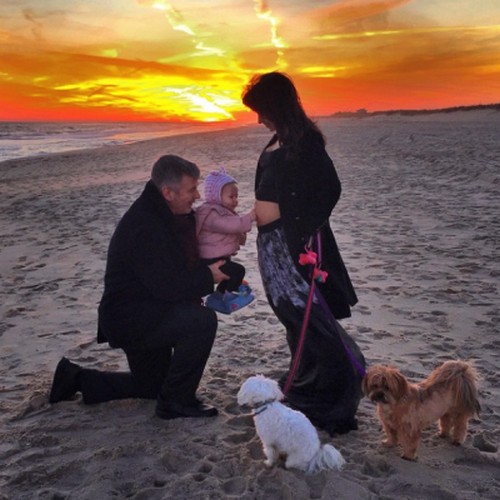 Alec Baldwin and his wife, Hilaria Baldwin, have just announced that they are expecting their second child together – see the baby bump photo. Alec and Hilaria announced the happy news on New Year’s Day, with Alec Baldwin tweeting, “2015 equals Mommy, Daddy, Carmen and a special guest star…..”

That post was linked to an Instagram post by Hilaria, who wrote, “The sun has set on 2014 and on my year of daily #hilariaypd ….2015 is going to be very exciting as we are thrilled to announce we are expecting another little addition to our family!” The picture attached to that post was one of Hilaria, her baby bump, Alec, and their baby daughter Carmen, all posing on the beach with the backdrop of the sunset.

This is definitely some positive publicity for Alec Baldwin, who has been in the media for all the wrong reasons last year. He’s fought with paparazzi, gotten arrested for illegal biking, had his TV show cancelled, and revealed himself to be a giant hypocrite and homophobe. Unfortunately for him, the Internet and the media have made it impossible for him to get away with his behavior, and he’s had to face the consequences of his actions more than once this year.

Of course, since his series of mishaps, Alec’s seemed to have [slowly] learned his lesson, especially since he’s been using social media as an image-correcting device in the past few months. Take, for example, this pregnancy announcement – what better palate cleanser than Alec Baldwin revealing that he’s expecting another baby? After all, America loves babies. They have forgiven many a celebrity for more serious offenses, simply because that celebrity has gone and had a baby – and then tweeted and Instagrammed about it, of course.

What do you guys think about Alec Baldwin’s and Hilaria Baldwin’s pregnancy announcement regarding their second child? Let us know your thoughts in the comments below.