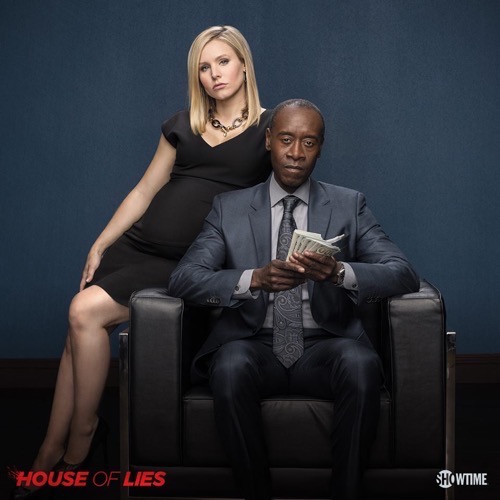 On Showtime tonight House of Lies returns with a another great episode Sunday April 5, season 4 finale called “It’s a Box Inside a Box Inside a Box, Dipsh*t,” and we have your weekly recap below. On tonight’s episode, Marty is on the verge of making K&A one of the biggest players in the business, if he can persuade his employees to stay.

On the last episode, Marty grew concerned about repercussions from Denna and looked to secure his place at K&A; Jeannie received an exciting proposition; Clyde reached out to his father; Roscoe became the center of an ugly incident at school. Did you watch the last episode? If you missed it, we have a full and detailed recap right here for you.

On tonight’s episode per say the Showtime synopsis, “Marty is on the verge of making K&A one of the biggest players in the business, if he can persuade his employees to stay. Jeannie gives birth. Clyde, Doug, and Kelsey await an offer – and Roscoe faces the consequences.”

Tune in to Showtime at 10PM EST for this great season 4 finale and we’ll be live recapping it for you right here as well. The cast of HOUSE OF LIES is fantastic. While you wait for the recap, check out a sneak peek of tonight’s episode below!

Jeannie screams in labor. One hour earlier, there’s a relaunch event for Kaan and Associates. The band pauses and Marty takes the stage. A heckler yells out f-k you. A glass comes flying at his head. Marty narrates and says at this point, he’s f-d in virtually in all ways. His sugar mama has pulled out and the bank will only float him only if all the new companies will stay with him. He has to beg the companies Denna raped and pillaged to trust him.

Marty says if he can pull this off, his balls will grow to epic proportions and his consultancy will be the richest on the planet. The glass knocks him on the noggin and he goes down. Then 10 hours earlier, Denna comes in and tells Marty she’s dumping K&A. She says she’s taking out all her financial and strategic support. She says she’s over him but he says she’s being a girl. Denna admits she’s a little hurt and says she wonders why.

Denna says it’s a feeling she hasn’t had since high school and wonders if they had a great love. She says that’s not it but he’s a child and she wants to get the f-k away from him. He says she used his son against him so she can f-k off. Clyde gets the call about their app. Doug and Kelsey wait nervously. Clyde says there is strong interest from Google and they’re going to make an offer today. They all giggle and they tell each other to calm down.

Clyde tells Kelsey they celebrate at the relaunch tonight. Doug says he knows he and Kelsey aren’t having sex anymore and Clyde is in mourning from killing his dad, he wonders if Kelsey with have sex with him. She says now. Marty pulls Doug and Clyde in and tells him that Denna has ditched them and they have to schmooze their clients. He assigns Clyde and Doug clients to work on and says Jeannie is out with Rachel. He says he’ll handle Grant Hoffman.

Doug tells Clyde that they may be able to help bankroll the new K&A. Clyde doesn’t want him to say anything but Doug says he thinks they can get $400 million to one billion. Clyde says that won’t happen and Marty says they can just finance K&A. He says he’d still treat them like shit. He tells them to get the f-k out of his office. Roscoe tries to ignore Marty as he leaves for school. Marty corners him and says school is probably going to kick him out.

He tells him to let him do the talking and tells Roscoe the school may want to prosecute him for a hate crime. Roscoe blows him off and Jeremiah asks if he gets what he did and says this is not him. Jeremiah says Roscoe poured more hate out into the world. He says he can’t imagine how much shit is already out in the world and says people are killing people who look like him because of the color of his skin, the way he act, dresses and wears a hoodie.

Marty tries to stop him but Jeremiah says Roscoe needs to hear this. He tells Roscoe he has made a mockery of everything people like him have been suffering through for years. Roscoe says he gets it. Marty goes to see Grant who’s playing his guitar. He says he’s happy that the sale of his firm went through. Grant says he heard Denna is backing out and says now what? He asks if he’s f-d. Grant says he has two kids in college and one who decided to be a pro in dressage.

He asks if he knows how much a dressage horse costs. He says 800k. Grant rails at him and says f-k you. Marty says he won’t fold up just because Deanna pulled out. He says he has the financing in place and says if he’ll sign the letter of intent, he can buy two ballet horses. Grant says if K&A folds, he’s got his dick in his hand. He says he won’t sign and is already looking. Grant plays his guitar and sings a song about Marty being a douche bag.

At the party, Grant tells others he won’t sign the letter because he’s got Marty by the balls. Kelsey, Clyde and Doug talk to Grant at the party. Grant is the one who heckles and throws the glass. At school earlier, Roscoe and Marty go see Principal Andrews. He says he thinks the culprit is Roscoe but Marty plays dumb. Marty tells his son to sit then says they need to unpack this and find out what they’re talking about. Marty asks if he’s willing to do the work to prove Roscoe is the culprit.

Marty asks if he’s going to do CSI and get DNA. He says this is where it’s headed. He asks how many students John wants to chase away. Marty says they can get litigious and reminds him how scary Monica can be. He says he’ll drag it through the press too. Then Marty says the whole thing can die right here in this room. He says one coat of paint and people will easily forget. John says they’ve all been through enough. Roscoe speaks up and says he doesn’t need to be protected.

Roscoe says he doesn’t want to lie and says he did it. He says if he wants to arrest him, he should do it because he won’t live life as a liar. Marty says okay. Four hours later, Jeannie is getting ready for the party and looks at her enormous belly. Marty says Grant is poisoning the room and he’s going to make him sign the letter. Marty says they need Jeannie there and says her wholesome good looks fool people. Doug says as soon as they get their app offer, Marty will be on easy street.

Kelsey asks if they’re investing all the money they haven’t made into K&A. Doug gets the call and walks away. Clyde asks why he’s walking away. Clyde asks why they’re letting Doug take the call and Kelsey isn’t happy. They offer $400 million and Doug presses for $800 million. Marty tells Doug they’re laughing – the offer is $400 thousand not million. Doug asks the Google guy to stop laughing. They tell him it’s firm on $400k.

Kelsey says that’s fine and says the VCs will double down on their next one. Clyde tells Google to shove it and says their app is off the mother f-king market. Clyde says he won’t end up like his dad. Clyde tells Kelsey they’re going to launch this app themselves and sell it once it’s established. She thinks it’s sexy and she agrees. Doug isn’t happy. Jeannie is at the ER screaming and cursing for drugs. Marty is hit in the head with the glass and goes down. Grant curses.

Everyone asks Grant what’s wrong with him. Grant starts to panic. Marty takes the mic and calls Grant a motehr f-ker and tells them all to listen. Marty tells them all that he’s not a nice person but he’s really good at what he does. He says he got them all so they could be one bigger better company. He says they can f-ing crush it and says he will make them wealthy, whole and better but they have to stick with him. He asks them to give him a year.

He says to give them one year to make them f-ing rich. Most of them say they’re in. The warmth spreads and Marty tells Grant he’s going to come talk to him. He staggers off the stage and heads for Grant while high fiving everyone else. He drags Grant and drags him away. Marty is about to punch him in the face outside when Grant says he’s sorry and drank too much. A guy pulls up in a vintage Ferrari and with an awesome Fender Stratocaster.

Marty tells him to take the shit and sign it or end up in court for attempted murder. Kelsey tells him to sign it and calls him a f-ing awesome. Marty gets a text and tells Grant he’s going to borrow the Ferrari since Grant’s too drunk to drive. Grant grabs the guitar out. Marty shows up and Jeannie asks what happened to his busted head. He says he took one for the team. She’s loopy on drugs and rhymes strangely. She says they need to get his huge headed child out of her tiny vagina.

She’s having a contraction and holds his hand crushing it. Marty says he did it and says they saved the company and it’s going to be huge. He says she’s going to be co-President. She says she took a job at Davis Dexter. Marty says it was too good to give up. Another contraction comes and she’s crushing his hand again. Nine months earlier, we see them spooning in bed and Marty tells her he loves her. Jeannie and Marty check out their little girl. She hands their daughter to Marty to hold.

Jeremiah and Roscoe show up to meet her. They are thrilled and tell them she’s beautiful. Marty kisses Jeannie and they cuddle then Marty looks inexplicably stressed.