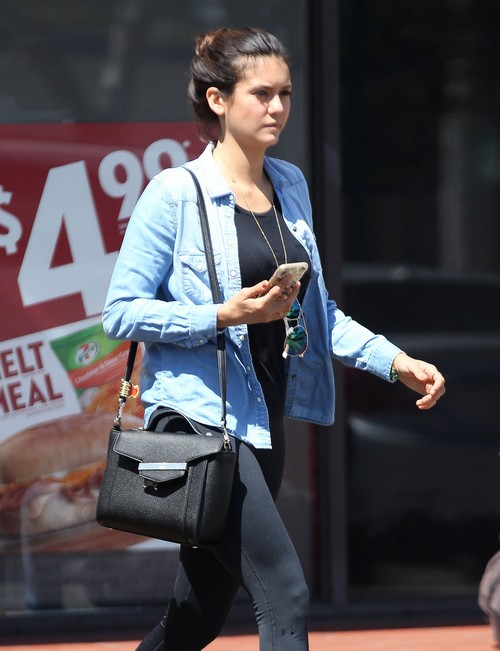 Is Ian Somerhalder quitting ‘The Vampire Diaries’ following the departure of his ex-girlfriend, Nina Dobrev? It looks like a possibility, and it wouldn’t be surprise if Somerhalder’s wife, Nikki Reed, was pushing the TVD star to exit the CW show and end the non-stop Dobrev association. It’s doubtful any move Ian makes will forever end the Nina Dobrev, Ian Somerhalder, and Nikki Reed love triangle. But, Somerhalder’s Instagram has been full of cryptic messages and hints that he is considering quitting his role as Damon Salvatore on TVD.

Somerhalder referenced TVD in a screenshot of top television shows in which “The Vampire Diaries” season 1 was in the lead, overtaking popular shows like “Grey’s Anatomy.” Ian captioned the photo, “The good old days… Look what was #1!!!!! Another image showed Somerhalder being transformed into his supernatural character titling the pic, “Damon Salvatore Season 1 hair/makeup/wardrobe test trailer self(ie) NoFilter.” Perhaps the most suggestive photo Ian posted is a close up of his eye with the caption, “Looking into the future…Love, Ian.”

Does this mean Ian Somerhalder is out and Nina Dobrev is back in? Not likely. While Nina left on good terms and the producers have sang Dobrev’s praises, noting that she was welcome to return, the TVD starlet wanted to move on to movies. Since her career hasn’t taken off like she hoped, Nina has adjusted her goals and is said to be attempting to land a role on a hit TV show like ‘Empire’ or ‘True Detective.’

Nina Dobrev also hinted at her “future” during the 2015 Teen Choice Awards. After winning the Teen Choice Award for choice TV actress for a sci-fi/fantasy show, Dobrev gave a speech that poked fun at TVD and underlined her exit from the show, stating, “Remember, change is coming, so hold and enjoy the ride, all right? It’s going to be fun.”

So what is fueling Ian Somerhalder to make changes of his own? Fingers point to his wife, Nikki Reed. The trio like to portray that all is well after Ian broke up with Nina and then married her friend, Nikki, after dating for less than a year. Somerhalder and Reed’s behavior suggests all isn’t as peachy as they claim. Ian unfollowed Nina on Twitter, which seems so miniscule and immature, but it’s an obvious move of trying to remove all associations. Nikki Reed and Ian Somerhalder’s absence at the 2015 Teen Choice Awards also didn’t go unnoticed despite the fact that Ian and Nina’s best kiss award was barely noted and squeezed in with Dobrev’s acceptance speech for choice TV actress.

Maybe Nina doesn’t care and wants to end the love triangle associations, too? She and her new boyfriend, Austin Stowell, haven’t been shy in the PDA department. Dobrev and Stowell took a fun and passion-filled trip to St. Tropez a few weeks ago making sure photographers snapped photos of the two kissing and embracing.

What do you think of Ian Somerhalder’s Instagram hints of leaving ‘The Vampire Diaries’? Will the TVD star quit? Is Nikki Reed calling the shots in Ian’s life? How does it feel for Nikki to be married to Nina Dobrev’s ex-boyfriend, as Ian Somerhalder will forever be known? Let us know in the comment section below.