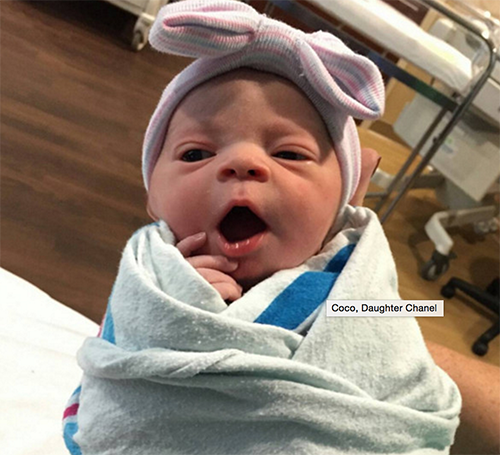 It’s a girl for Ice-T and Coco! Earlier this year, Ice-T and Coco confirmed that she was indeed pregnant with their first baby together. A lot of eyebrows were raised by Coco’s lack of baby bump, and the reality TV star herself even confessed in an interview that she was growing concerned that she wasn’t “showing” as much as other women were in their second or third trimester.

Coco could probably consider a career as a psychic. On Saturday, November 28 Coco posted a photo of herself posing next to a Christmas tree, and showing off her 37 week baby bump. Ice-T’s wife captioned the photo, “This baby is coming early—a mothers intuition…#ChanelNicole is trying to make her appearance.”

Four hours later Coco took to Instagram and shared a photo of baby Chanel! Apparently, Coco’s “motherly intuition” is spot on! She captioned the adorable photo of her and Ice-T’s tiny newborn baby girl, “Surprise!!! Look who came early!! Welcome the new arrival of Chanel Nicole.. A beautiful healthy 5.7 pound and 18 inch baby girl. Ice and I are so proud! I cried while she was coming out I was so excited to meet her!”

Throughout Coco’s pregnancy, the internet constantly ridiculed her tiny frame and tiny baby bump – Coco was constantly reassuring social media followers and media outlets in interviews that her doctors said everything was on track and her baby was healthy as ever. It looks like the doctors were right, and despite being born a few weeks early – baby Nicole Chanel is in tip top shape. And she is super adorable!

Congratulations to Ice-T and Coco on their beautiful baby girl, check out her first baby picture and let us know what you think in the comments below!