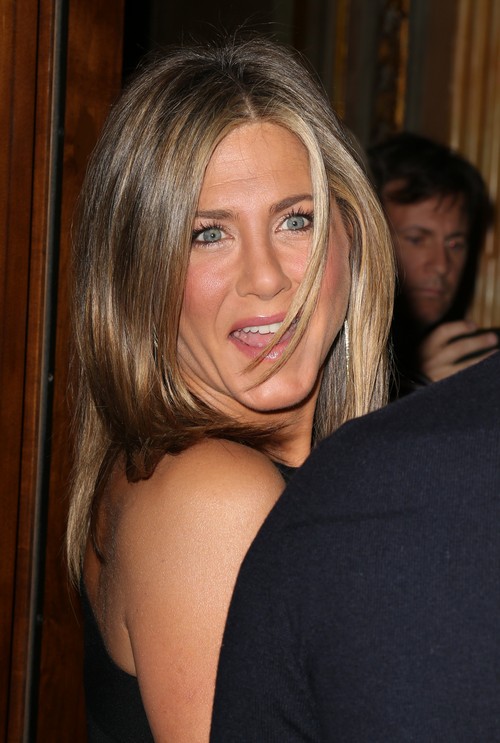 Jennifer Aniston cheated with Justin Theroux on Heidi Bivens and that is a fact. Jennifer Aniston is continuing her Oscar campaign at full speed, and her latest pit stop was the cover of In Style Magazine. However, I’m not sure if Jennifer Aniston thinks we’re stupid or if she’s just underestimating the audience. In the accompanying interview, Jennifer spends a lot of time going over her relationship with Justin Theroux, but one particular part of the interview stuck out – the part where she blatantly lies about when she and Justin got together!

This should be included in PR training for every celebrity: do not lie about things that are easily discovered, especially in the age of 24/7 internet and media coverage. Now, Jennifer’s explanation for when she began dating Justin Theroux is, “We just became very good friends, as did everyone on that [Wanderlust] set. We didn’t start dating until the following summer, after he went through a breakup. All of a sudden it was just like, ‘Well, you’re one of my closest friends and…’ Somehow I just saw him in a different light once he was available.”

Ok, barring the rumors that Jennifer and Justin actually hooked up on the set of Wanderlust, Justin’s ex Heidi Bivens has been very, VERY vocal about Justin cheating on her with Jennifer. Plus, there are pictures showing Jennifer and Justin going on dates during the spring, not the summer. Sorry Jennifer, your story’s been busted.

Obviously, Jennifer Aniston isn’t going to admit to homewrecking a serious relationship in the midst of her awards season campaign, especially since she’s tried so hard to play the victim card thus far. It’s been all about how she’s moved on from the terrible, emotional wreck of Brad Pitt cheating on her and how she’s come out stronger than ever. If it comes out that she hooked up with Justin Theroux when he was still with his longtime ex-girlfriend, then all of that hard work comes undone.

See, this is why celebrities need better PR training, especially when it comes to Oscar campaigns. Don’t you guys agree? Let us know your thoughts in the comments below.